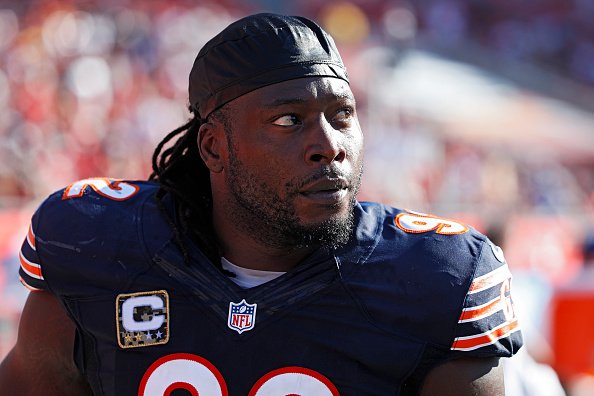 Week 16 was a particularly rough game for the Bears both on the ground and in the air. While my title may suggest mercy, overall this unit made far too many mistakes. When your defense gives up 208 yards and 4 touchdowns on the ground, there must be a collection of bad performances. Matt Barkley did no favors by giving the Redskins 5 turnovers.

While it may seem somewhat masochist in nature, I looked at the tape. I narrowed down 5 of the biggest run plays Saturday that accounted for 108 yards and 3 touchdowns collectively.

Disclaimer: I'm interpreting the gap assignments below from what I see on the tape. Sometimes, it's hard to tell exactly whether a player is being expected to play a single gap or two gap.

Situation: The Redskins have gashed the Bears with long passes over the middle to Jackson and Garcon.

The Redskins call: Playing out of the gun, pre-snap the call for the Bears defense is strong to the right. Cousins calls a motion to bring the tight end across the formation bringing the linebacker, Kwit, with him. Kwit looks to be playing man on the TE. The Redskins end up running a Read counter behind their Right Tackle.

The Bears: Look to be playing single gaps with their down linemen and crashing to the right. There is one linebacker playing the run and his call is likely the right A gap on a run right or the left B gap on a run left.

Pre-play dysfunction: With the TE motion no longer indicating a strong right, I believe the Bears should've made a call on the line so as to not crash right. Deon Bush looks like he's lost.

Floyd is playing push and needs to read for a counter or reverse his way. Respecting Cousin's ability to play the read option, Floyd is frozen opening up a hole behind the Redskins RT. Freeman reads the play as an inside zone but doesn't find himself out of position. After watching this, I don't think this is a touchdown without the refs properly calling a hold: 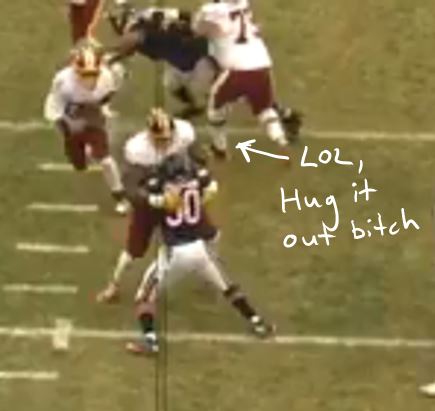 In the end, Floyd could've collapsed and made the tackle and Amos is late to come up and help in the run game, but that's likely what happens when you give up over 60 yards in 3 plays in the air. If the Bears make the right call and audible out of the right crash, this never happens. 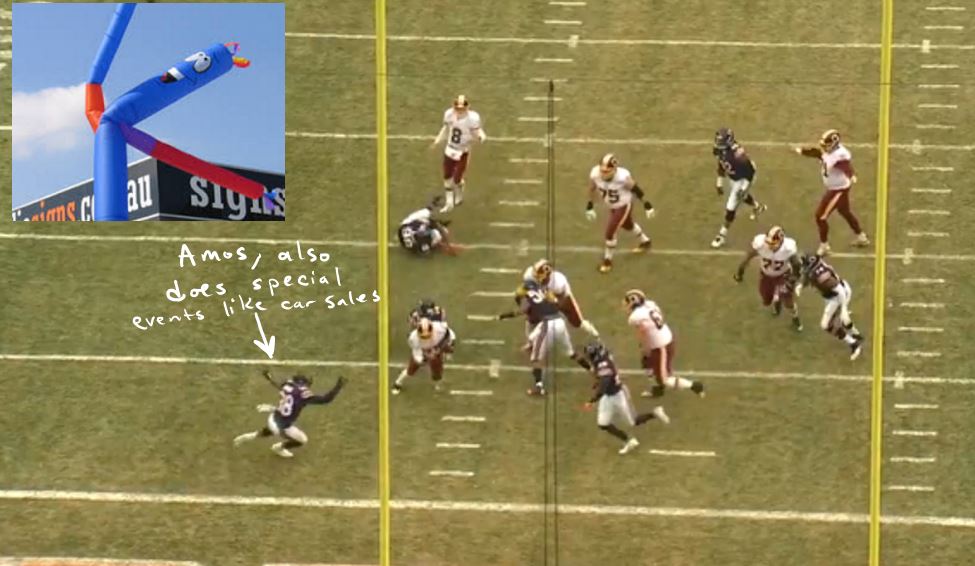 Situation: After a ridiculous PI call on Porter, the Redskins find themselves in a position to score late in the first half.

The Redskins must've seen something they liked because they kept going to the well with Read Counters and Counter runs. Here, the Bears are in a Nickel formation with two down linemen and four linebackers. CJ Wilson looks to be playing two gaps on the weak side.

Next play Q2 1:48 Cousins runs right for the TOUCHDOWN.

Situation: After the previous run, Washington calls a timeout and trots out for their first play in their own RedZone.

Presnap, all gaps looked covered. Tracy porter is playing man against the TE and likely intended to support in the run game.

Cousins runs the read correctly seeing McPhee crash and trots for 9 yards and a Touchdown. Porter also finds himself incapacitated. This is a horrible touchdown, McPhee just looks like a rookie.

In the 3rd Quarter:

Situation: with 8:08 left in the 3rd and up by 10, the Redskins look to assert themselves in the run game. The Bears could really use a stop here after a Matt Barkley interception.

The Redskins are lined up strong left in the Singleback formation. The Reskins will end up running the sweep to McPhee's side. The Bears are lined up in a Nickle formation, with CJ Wilson two gapping in the middle.

This is tough. At first, I was surprised that McPhee missed making a play on this sweep as he shows good push. I initially thought McPhee was out position. However, after watching the play a few times, it was clear that Trent Williams prevents this and gets away with a bad hold in front of the side judge. Throws up his hands to complete the theatrics. Thompson shows off his speed and Kwit pushed him out after gaining 9 yards on 2 and 10.

Big run in the 4th quarter:

Situation: After Barkley's fifth interception, the game is all but over. The score is 34 to 21 and Fox is using his timeout in hope of one last futile chance. With 3rd and 4, he may at least have that opportunity.

The Redskins line up in a heavy Singleback formation with one extra lineman and two tight ends. The Bears have a 4-4 set with four down linemen and four linebackers.

After the snap, the Redskins pull their guard behind the tackle. Willie Young takes himself out of the play against a Tight end and CJ Wilson is driven back to open up the biggest hole that Mack Brown may ever see in his professional career. The play becomes a footrace to the finish and Brown will not be denied. Ball game. Place the blame here with CJ Wilson and Young if you must. The thinned crowd of Bears loyalists and vagabond Redskin fans start making their way to the exits.

If this means anything for the offseason, it should be stressed that the Bears missed both of their Nose Tackles Saturday. Finding a way to keep Goldman on the field starts this offseason. Finding another big man opposite Hicks is critical along with adequate depth. I think Kwit showed good instincts for being a rookie, but I'd like to see him look more decisive next year. Without Floyd, the Bears have an anemic pass rush which makes the weak defensive backfield look weaker. If that isn't mitigated or improved this year, that will surely be Fox's death knell if it's not already tolling.

What position on the Front Seven do you think most needs an upgrade this offseason?