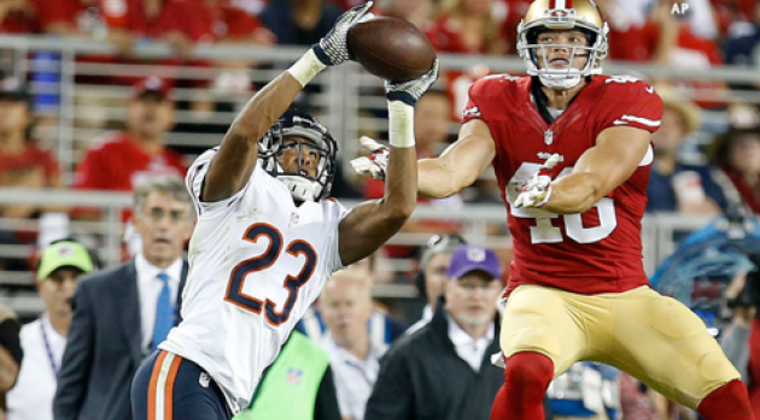 Many fellow readers on Windy City Gridiron remember the optimism surrounding the 2014 Bears. To improve the horrid 2013 defense, GM Phil Emery went on a spending spree in which he signed Jared Allen, Lamarr Houston, Willie Young, and Ryan Mundy. In the draft, every fan remembers his/her own way of expressing frustration as the St. Louis Rams selected Aaron Donald, the Pittsburgh DT destined to become a superstar. Still, we all remained optimistic that Phil Emery's first three draft picks (Kyle Fuller, Ego Ferguson, and Will Sutton) would pan out.

I could describe the disappointment of the 2014 season in depth, but I'll spare you the sorrow. Instead, I will quickly summarize Kyle Fuller's play. Some people were initially wondering why Emery drafted a CB despite having both Tillman and Jennings, but Emery guaranteed that Fuller would have a role in 2014. He wasn't wrong. Peanut Tillman tore his triceps against the 49ers, and no matter how many tears he shed that day, he was out for the season, forcing Fuller into a starting role. He had a blazing start, becoming the first player in the NFL over the past 20 years to record 3 interceptions and 2 forced fumbles in their first three games. He then slowed down his production, partly due to injury, and ended the year with 4 INTs.

In 2015, Marc Trestman and Phil Emery were (thankfully) fired, and Ryan Pace and John Fox were hired. With them, they brought Vic Fangio and his 3-4 defense to replace the 4-3 that the Bears had been playing essentially since Buddy Ryan (RIP)'s legendary 46 defense. Naturally, in the first year, the front 7 struggled. The team did not generate a single sack until Week 3 against a porous Seahawks offensive line, and had only one bright spot (Pernell McPhee) for the majority of the season. Lamarr Houston was still recovering from the ACL tear that he suffered against the Patriots in 2014. At one point, Willie Young was so frustrated with his new role as a 3-4 OLB that he requested a trade from the Bears. The ILB positions were revolving doors due to performance and injuries, with Shea McClellin, Christian Jones, Jonathan Anderson, John Timu, LaRoy Reynolds, and Lamin Barrow all seeing snaps. The defensive line similarly lacked cohesiveness. Jeremiah Ratliff was the only player with experience in the 3-4 at the NFL level, and he was released early during the season by the Bears. While Jarvis Jenkins was solid and Eddie Goldman was promising, the Bears did not have any continuity along the front 7, which showed greatly early on in the season.

Now according to the title, this is a FanPost about Kyle Fuller, not a torturous reminder of the struggles over the past few years. Why, then, did I dedicate an entire paragraph talking about the front seven? What many fans do not realize is the direct relation between a team's front 7 and a team's cornerback play. Kyle Fuller struggled horribly early on last season; for those who need a reminder, I would invite you to re-watch the Cardinals game. Larry Fitzgerald completely dominated the Bears with 3 TDs. On his first touchdown, Fitzgerald lined up close to the line of scrimmage, and Fuller lined up slightly to the outside of Fitzgerald. Fitzgerald ran a perfect route, beginning by running straight before faking towards the sidelines and coming back towards the middle of the field. Fuller bit on the fake and was too late to catch up to Fitzgerald. Fitzgerald's second TD came on a trick play by the Cardinals. Carson Palmer handed the ball off to Chris Johnson, who threw it back to Palmer. Fuller bit hard on the running play, and Palmer threw it over his head for a TD. On this play, I admit that I had trouble understanding what Fuller's assignment on the play was so I can't say that it was his fault. Although it seemed like Fuller bit on the route, both Shea McClellin and Adrian Amos were in the vicinity of Fitzgerald as he made a great grab for a TD, so I don't know whether this was Fuller's assignment or a zone coverage. Apart from these 2 TDs, Fuller had a horrible pass interference penalty on John Brown and allowed multiple other catches. Towards the end of the 3rd quarter, I noticed that Kyle Fuller lined up across Fitzgerald less and less, with Terrance Mitchell and Alan Ball taking a majority of his reps.

Now I can't attach videos of each play involving Fuller over here for copyright reasons, but check this out:

This is a video of Larry Fitzgerald's highlights on that day, where you can watch the plays I described just now (by the way, if you see any play differently than how I saw it, please let me know). The thing I want you all to notice is how clean the pocket was for Carson Palmer. Palmer had plenty of time to make his decisions and was never flushed out of the pocket, which would make any CB look awful. Furthermore, this was a game against the Cardinals a very good team to begin with. I am not making excuses for Fuller, who had a horrible game, but am just making an observation that towards the beginning of the season when Fuller struggled, the pass rush was horrible. As mentioned previously, they did not register a single sack in the first two weeks of the season.

That changed as the season went on. The aforementioned Willie Young, who initially had troubles recovering from his own injury and learning his new position, finished with 6.5 sacks and earned himself a new contract. Lamarr Houston, similarly recovering from an injury and learning a new position, led the team with 8.0 sacks. Pernell McPhee was one of the best pass rushers in the NFL when healthy, finishing with 6.0 sacks. Jarvis Jenkins finished with 4.0 sacks, while Eddie Goldman finished with 4.5 sacks.

With the front 7 playing better and Fuller getting more comfortable in the scheme, he began to completely turn around his 2015 season. According to Pro Football Focus (I know they're horrible at what they do, but they're saying good things this time), Kyle Fuller was the 14th best cornerback in coverage from Week 3 to Week 17 last year. After Week 6, he did not draw a single penalty. From Week 8 to Week 14, Kyle Fuller allowed a passer rating of just 39.1. In 2015, Kyle Fuller allowed only 5.7 yards per target (14th among qualifying corners), and was only targeted 17.3% of the time. Now, of course you will say that he was demoted to CB2 before he started being successful. Now that isn't true (as I'll establish soon), and even if it was true, he's still a very good cornerback. As the old saying goes, "if it ain't broke, don't fix it."

Now back to the allegation that he was a CB2. It's true that he shadowed some WR2s while Porter shadowed some WR1s, but that was mainly matchup-based assignments and not a strict CB1 vs CB2 role. Take, for example, the game in Soldier Field against the Vikings on October 1st (this may or may not be somewhere on YouTube, but I can't link it for copyright reasons). For most of the game, Kyle Fuller shadowed Stefon Diggs, the Vikings' #1 receiver (for those who will say that Mike Wallace was the Vikings' #1 receiver, I give you a hearty LOL). To make a long story short, Kyle Fuller absolutely shut down Diggs before leaving with an injury. Diggs then dominated the rest of the Bears' DBs. Even against Calvin Johnson and the Lions, Kyle Fuller saw some snaps across from Megatron; while the results weren't always pretty, there isn't a CB in the NFL that could shut down Megatron. Overall, however, Fuller had a great season.

Now that Fuller has suffered an injury and will likely be out into the regular season, some foolish websites such as Rotoworld have been claiming that the coaching staff has been covering up the fact that they aren't pleased with Fuller, and he will lose his job to Deiondre Hall or another CB. Unfortunately, I've been seeing similar sentiment come to the friendly confines of Windy City Gridiron, where trolls are usually dealt with swiftly. I'm no insider, but I'm 99.9% sure that's a load of garbage (I'm being careful about my language so I don't get banned again). Fuller had a great year last year after overcoming a slow start, and remains a key part of the Bears' defense. The Bears will have a tough time replacing him for the few weeks that he'll be gone, but when he returns, he will be welcomed with open arms. The front seven is better than it was at the beginning of last season, Fuller has more experience than he did at the beginning of last season, and he will be a solid CB assuming he recovers well from injury. Bear Down, ladies and gentlemen.

What Will Kyle Fuller's Role Be Upon Returning From Injury?