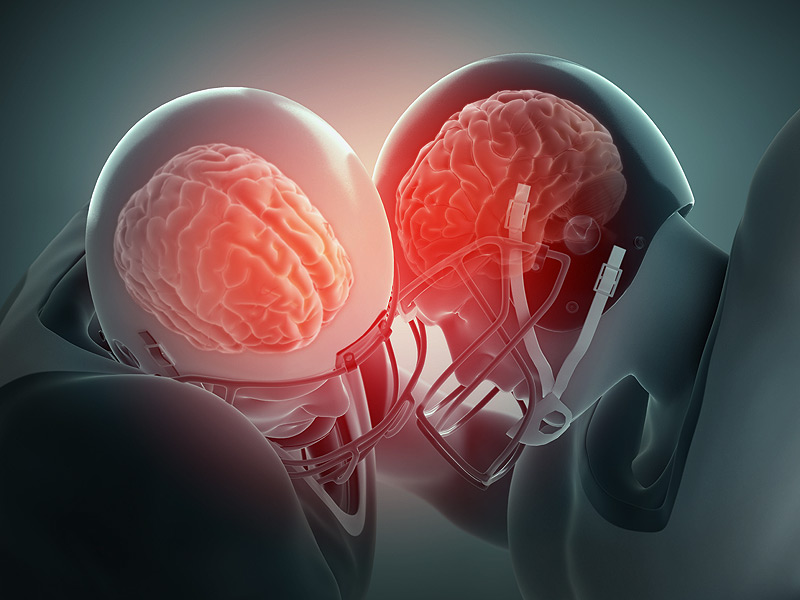 This multi-part Fanpost series will take a closer look at injuries commonly found in professional sports with a focus on recent injuries to Chicago Bears' personnel. I am not a medical professional. I am simply a normal guy with internet access, the ability to use GOOGLE, some personal experience with sports injuries, and far too much free time.

Getting your bell rung, seeing stars, being knocked for a loop. We've all heard these, or similar, expressions before. They are softer ways of saying concussion, and concussion is a softer way of saying Traumatic Brain Injury...sounds scary right? Well that's because it is. Simply put Traumatic brain Injury (TBI) is a dysfunction in otherwise normal brain activity caused by forceful impact or traumatic injury to the head, neck or upper spine. Injuries are categorized from mild to severe while symptoms, recovery time, and susceptibility levels vary widely from person to person. One thing that they all have in common, however, is that the brain has been physically damaged. For the record...that is bad.

The NFL has instituted a number of protocols and safeguards in the recent years with the intent of limiting the occurence, and mitigating the effects, of concussions. The United States Military has also invested time, money, and resources into battling TBI. While the initial diagnosis may seem like it would be pretty straight forward it really isn't. Yes, a person who is knocked unconscious probably has a concussion but what if they aren't knocked out? How is it decided whether that glassy eyed expression, slurred speech, and wobbly gait are truly symptomatic of a concussion or if the person in question always looks like that? Who's to say the nausea they're experiencing isn't from the gas station sushi they ate on the way to the stadium?

The answer to that is the baseline. There are a number of different methods for establishing a cognitive function baseline. They range from simple questionnaires, like what you fill out before a basic medical screening, to tests that measure mental response times and hand/eye coordination, to CTs or similarly complex (and expensive) procedures. The point of them all, however, is the same. Establish what your normal level of brain function is and identify pre-existing conditions that may contribute to increased risk of future concussions. NFL teams utilize a combination of written, electronic, physical and verbal assessments to establish a baseline for each player during the offseason and preseason while the Army uses similar assessments as part of their Soldier Readiness Program, conducted before and after deployments.

The Army uses the Military Acute Concussion Evaluation (MACE) and the NFL has their Sideline Assessment Tool to assist with initial diagnosis when TBI is suspected. These are "field expedient" methods for deciding if TBI has occured. They take a few minutes to administer and are pretty universally complained about by the patients receiving them due to how silly they think they look standing on one leg or reciting the days of the month/months of the year backward and forward while some medic shines a 10 million lumen devil light into their eyes, melting their cornea...uhmm...sorry I got off track there.

Steps and Timeline for Recovery:

So once a person is diagnosed what happens? What is the treatment and how long is the recovery process? Well, like I have already stated, I am not a medical professional. Mike Evans is though, and his video entitled Concussion management and return to learn does a very good job of explaining, in very simple terms, the general steps to recovery and the importance of having a recovery plan. Doctor Evans' concussion video series is targetted at child concussions but the content really is relevant for all ages. The first thing to remember is that your brain needs to rest. We don't really think of activities like reading, watching TV, and surfing the internet as strenuous but our brains certainly do. The NFL's return to play protocol is fairly simple and breaks down into 5 steps (these steps start only AFTER a specialist has identified that the player has returned to their baseline):

While in this process the player is constantly being evaluated using the Sideline Assessment Tool and other evaluations administered by the Team's neurologic specialists. There are no set timeframes for any of these steps since everyone and every concussion is different. The purpose of these steps is to slowly re-integrate the player back into the game and limit the risk of repeated injury or worsening symptoms. Players are not allowed to start the next step until they have received multiple evaluations, exhibiting no symptoms, during the previous step. So, basically, if they get a severe headache after 5 minutes on the stationary bike they get dropped back down to step 1 for a bit and then re-evaluated before they can continue. If they do just fine with the bike for 3 or 4 sessions (the number of sessions is the doctor's call but it has to be multiple and consecutive) they can be cleared to move on to step 3 and so on.

This process is why the Bears have Eddie Royal and Zach Miller coming back at different times despite being concussed during the same week, and Ka'Deem Carey stepping back on the field in a much shorter timeframe. Also keep in mind that these steps and their details are still just guidelines. Teams have to follow a bare minimum protocol but there is nothing stopping them from being extra cautious and utilizing stricter guidelines or keeping a player on a specific step for an extended period.

Even after all three of these fine gentlemen are back at 100% and, hopefully, giving opposing defenses absolute fits on gameday they aren't exactly out of the woods. Some studies have determined that close to one third of atheletes have sustained one or more concussions that went undiagnosed. If we conservatively estimate that an athelete has suffered one previous, undiagnosed concussion for every diagnosed concussion then that means all three of the players mentioned above have had around 6 or 7 concussions in their NFL careers.

Length of recovery isn't necessarily correlated to the severity of the concussion or the number of previous concussions so we can't reliably say Eddie is the worst off of the group. In my wholly uneducated opinion, I would say Ka'Deem is at the most risk going forward due to the position he plays, his running style and the frequency of recent concussions. I honestly wouldn't be surprised if he goes out at least once again this season and, if he does, he should think long and hard about retiring from the sport now to save his long term health.

Doom and gloom aside it is safe to say, given the steps each player is at in the return to play protocol, all of them should be available and at full health (barring seperate injury) come week 1, regardless of if they participate in any of the remaining preseason games or not.

Thanks for reading and I hope this Fanpost was, at the very least, mildly informative. I might have enough in me to cover all of the known injuries Bears' personnel are currently facing before the end of pre-season and my intent is to continue this series throughout the season as injuries are pretty much innevitable.

Assuming I find the time and motivation, which injury/injured player(s) would you like to read about next?