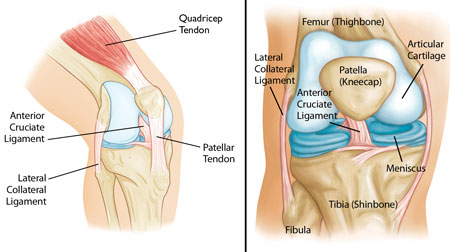 The Chicago Bears are no strangers to injury, especially over the last few years. They lost yet another starter in the third pre-season game when Tracy Porter left under the concussion protocol. You can read more about concussions in the first installment of this series but today we are focusing on a different part of the body.

Unless your name happens to be Cotton Hill then there is a fairly good chance you have at least one knee. The Chicago Bears have a number of players currently in one stage of recovery or another from knee injury or knee pain. Whether it's Hroniss Grasu's torn ACL, or the much more nebulous injuries of Kyle Fuller and Pernell McPhee, knee injuries are pretty commonplace in the NFL.

Anatomy of the Knee:

As seen in the picture above, the knee is a very complex mechanism with a number of essential, moving parts. The Femur, Patella, Tibia and Fibia are held together by a series of muscle tendons and ligaments with cartilage and fluid sacs acting as buffers and shock absorbers to keep the solid bones from grinding against each other.

The Lateral and Medial Collateral Ligaments (LCL and MCL) prevent the Femur and Tibia/Fibia from slipping too far to the left or right while the Anterior and Posterior Cruciate Ligaments (ACL and PCL) prevent slipping too far forward or backwards. The Medial and Lateral Meniscus are layers of cartilage sitting on the top of the Tibia which act as shock absorbers while the Articular Cartilage is a thin layer lining the bottom of the Femur meant to prevent bone on bone friction with the Patella (kneecap) and the Meniscus. The Quadracep and Patellar Tendons help to keep the Patella in place.

All of these machanisms within the knee are interconnected at some level which makes diagnosis, treatment and recovery a tricky task to say the least.

Pain, swelling and warmth in/around the knee as well as trouble bending/fully extending the leg are common symptoms of injury to one or more of the mechanisms within the knee. Difficulty walking, standing or bearing weight are pretty good signs that the injury is acute and dealing with one or more ligaments or tendons. Popping, grinding and crunching noises are usually never a good sign and are likely indicative of worn down cartilage and arthritic knees.

When looking at symptoms it is very important to identify what type of activity or action led to the symptoms. Twisting motions and quickly changing directions affect certain parts of the knee differently depending on the motion. Impact injuries have different effects depending on where and from what direction the impact occured.

The time until onset of the symptoms is also very important. Immediate swelling and increase in temperature around the knee is indicative of ligament or tendon damage. Delayed onset swelling which comes and goes can be due to any number of issues from basic overuse, to chronic arthritis, to pockets of infectious fluid beneath the Patella.

We've all heard these terms before and, to the layman, they seem to be synonyms. The truth is they refer to completely separate, although similar, injuries. Sprain refers to ligament damage and commonly has three grades of severity. Grade 1 (mild) is a stretching of the ligament with no tearing. Grade 2 (moderate) involves partial tearing and Grade 3 (severe) is a complete or near complete tearing. Strain refers to tendon damage and carries the same grading system. This can be the cause of a lot of confusion if you, or the person reporting the injury, aren't familiar with the particulars. Most of the time a Grade 3 sprain/strain is referred to simply as a tear but when dealing with Grade 2 injuries it becomes a little more unclear and the terms tear and sprain get swapped around quite a bit.

Most of the less serious types of knee injury can be treated using the rest, ice, compression and elevation (RICE) method to reduce swelling and pain while increasing range of motion. Reduction of swelling is a key step in the diagnosis process as well since it allows for more sensitivity in physical examinations and visibility in imaging tests like the MRI. Physical therapy and exercises meant to build up and strengthen the muscles surrounding the knee are also common methods used to support the natural healing of injuries.

If an injury is too severe to heal on its own or the individual's normal level of activity is too intense to promote proper healing then surgery is the most common option from treatement. Open surgery is sometimes required, usually for major fixes like full knee replacement, but with advances in technology the arthroscopic procedure has become much more common and is heavily preffered due to its non-invasive nature and faster heal time. Regardless of the type of surgery, rehabilitation usually includes some combination of RICE, physical therapy and pain management.

Most of us have heard of it. It is the magical medical technology that, along with grafting, has transformed the "blown out" knee from a career ender into a 6-8 month speed bump. What is it, however, and what does it entail? Well the basis of the procedure is making a small incision and inserting a slender tube into the empty space of the knee. That tube allows for the insertion of an endoscope (tiny camera), allowing for full visibility of the knee and all its parts, as well as a number of surgical tools for making repairs or removing debris. The important thing to note about this procedure is that it can be used simply as a diagnosis method without any actual work being done on the knee. Since imaging is the most effective way to identify damage within the knee an endoscope is a quick, easy and relatively painless method which can reveal a lot more than your standard MRI or X-ray.

Now that we have waded through the myriad details, what does it all mean for the Chicago Bears and their stable of players currently suffering from knee injuries? Well that is not an easy question to answer but we'll start with the biggest injury first.

Hroniss Grasu suffered a torn (read Grade 3 Sprained) ACL during practice. Unlike his teammates' knee injuries this is a very definitive diagnosis. We know his ACL was torn, likely completely, and we know that surgery and an extended recovery is expected. He will receive a graft (either from his own tissue or a donor) that will reconnect the ligament fibers at the site of the injury. It's an outpatient surgery so he will get in, get treated, and be sent home all in the same day. General timeline for an ACL tear is 6-9 months but the fact is professional athletes are a different breed of animal with access to tons of modern medical advances and a relatively bottomless wallet. Top line physical therapy facilities and techniques could easily cut that 6-9 months down to a slightly more reasonable 4-6 months. The flip side of that is the difference between full recovery and football shape. That much time on the shelf causes muscles to atrophy. Even with full recovery an NFL player will continue to put incredible stress on their knees and Grasu, while people bemoaned his lack of weight last season, is still 300+ pounds. Look for a full recovery by late 2016 or early 2017 with motivational tweets showing him working out and getting stronger. Unless there are complications or the graft doesn't take, necessitating a second surgery, he should easily be back working with the rest of the team come training camp time next year.

Pernell McPhee has a history of knee problems and multiple surgeries already. His right knee was worked on twice during 2012, while still with the Ravens. The most recent surgery was done on his left knee, which begs the question of whether or not the left knee issue was caused by his body overcompensating. We know that McPhee had surgery late last year. I am not aware of any details released regarding what exactly was done during the procedure other than the term "repair" was thrown about by some media outlets. The recovery time depends on what was repaired. A Meniscus tear can carry a recovery time of 3-6 months. He has already had the upper range of that timeline to recover yet he's still not on the field so is it simply a little longer recovery or was it something different like a Grade 2 sprain of one or more ligaments like what he suffered in his right knee? My guess is that his original surgery is just taking a little longer than was optimistically expected since I haven't heard anything about a second off-season surgery. Estimating him to be full go, if a little rusty, by week 2 or 3 at the absolute latest and I'm not ruling out week 1 until the injury report tells me otherwise. (UPDATE: John Fox may have let a little something slip in a press conference regarding McPhee's progress. The comment comes between the :42 and 1:00 mark of the video where Fox mentions the training staff are working with McPhee on his change of direction ability. This sounds suspiciously like his surgery had a lot more involved than previously thought. We are over 8 months out from his surgery and he, if you read into the comment, may still be in the final phase of rehab. That's way longer than a Meniscus repair or even a standard grade 2 sprain. If that is the case then I'm going to push my projection for his return back to around week 4 at the earliest and expect a good deal of "rust" in his first couple games back regardless of when they happen.)

Kyle Fuller reportedly has been battling knee pain, in spurts, all offseason. He underwent an arthroscopic procedure in pre-season week 2 while the Bears were practicing with and playing against the Patriots. There has been no mention of any repairs done to his knee as of yet. Statements by the FO and coaching staff indicate there was some mild discomfort and swelling that would come and go. They also said that they noticed it begin to effect his movement in the first preseason game against the Broncos. That's not a whole lot to go off of. It is possible that they only used the surgery as a diagnosis tool and didn't actually touch anything inside his knee. If that is the case my guess would be a Grade 1 sprain/strain like Patellar tendenitis or an overuse injury like Knee bursitis (inflammation of the fluid sacs inside the knee). Regardless of what was identified there is a baseline recovery from the procedure itself. Depending on the individual, 3-6 weeks is a fairly standard timeline for full recovery followed by whatever rehab is necessary to get back to football shape. If overuse was the problem then the limited movement during his surgery recovery could help with what I call "Young and Stupid Syndrome", something that Kevin White undoubtedly had a serious case of last offseason prior to his shin surgery. Best case scenario Fuller is back on the field by week 1 but I think that is a serious longshot because both the surgery and the initial problem would have to be fully healed. Worst case scenario is they are not fully reporting the extent of the injury and he was suffering from a minor tear of the Meniscus or Grade 2 sprain/strain meaning he'll be back in action after the bye. I think the most likely case is his recovery process sees him full go around week 3.

As always thank you for reading. The next installment will be out prior to regular season week 1 and will cover shoulder injuries.

Will McPhee and Fuller be available Week 1?