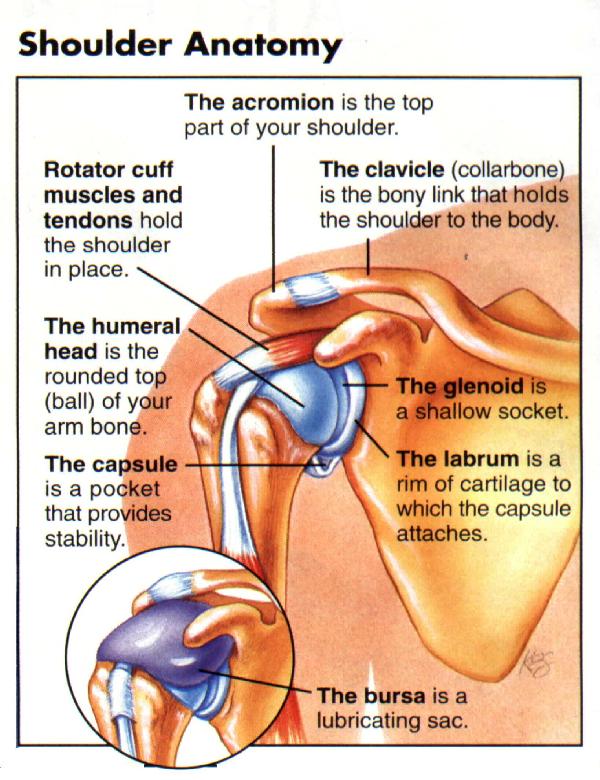 In this installment of my ongoing Fanpost series I will be focusing on shoulder injuries commonly suffered by NFL players, treatments for those injuries, and general recovery times. I am not a medical professional and any recovery time estimates made by me in this article are purely conjecture. Sources for medical terminology, common treatments, and average recovery times are as follows:

A number of different injuries have been sustained by players of all 32 NFl teams this preseason and the Bears are no exception. In the previous installments of this series we looked at concussions and knee injuries and now we will venture into the world of the shoulder. In case you aren't a Bears fan, or you are and have been living under a rock recently, Kyle Long injured his shoulder during pre-season Week 2. Presumably the injury occured during the game against the Patriots. We all know how guarded the front office can be when it comes to injuries which is why it was no surprise when John Fox said "It doesn’t really matter what I think. There are medical people involved and when he’s cleared, he’ll play."

It was an article written by Brad Biggs of the Chicago Tribune that brought the term "labrum issue" into the conversation and opened up the doors to conjecture regarding how long he would be on the shelf. With all of that said let's take a look into the anatomy of the human shoulder, what each part does, what the most common shoulder injuries for football players are, and the related treatments/recovery times for each.

Anatomy of the Shoulder:

Just like the human knee, the shoulder is a complex mechanism comprised of multiple bones, tendons, and muscle groups. The picture above shows the bone/cartilage level of the shoulder but keep in mind this area is also the intersection of several major muscle groups including the tricep, bicep, trapezius, pectoral and latissimus dorsi. The two major bones that make up the shoulder joint are the scapula (shoulder blade) and the humerus (upper arm bone).

The acromion and the coracoid process are both bony projections off of the scapula, and the clavicle (collarbone) connects the shoulder to the body. The humeral head (rounded top of the humerus) is lined with cartilage and fits loosely into the glenoid (a shallow pocket in the scapula). The labrum is a cup-like section of fibrous cartilage that lines the rim of the glenoid which the humeral head rests in.

The rotator cuff is actually a combination of the infraspinatus, supraspinatus and subscapularis muscle/tendon groups which help provide support and range of motion for the shoulder joint. Just like the knee joint, the shoulder has a bursa (fluid sack) which provides lubrication and a level of cushion for the structures inside the joint.

Shoulder injuries generally fall into one of two categories. Instability injuries deal with movement of the shoulder out of its normal range or position. These types of injuries greatly increase the chances of repeated dislocation. Impingement is excessive rubbing of the shoulder muscles against the acromion. "Thrower's Shoulder" is the common term for these types of injuries and they tend to be more common in sports that require overhead motions.

Now Brad Biggs brought up the "labrum issue" so I think it's only fair that we focus on it for this article. There are a few different ways that a labrum can be injured. Labral tears occur from acute trauma, such as dislocation, and occasionally from repetetive motion (usually overhead). Bankart tears and SLAP lesions are examples of ways that the base of the labrum, where it meets with the glenoid, can be torn. Essentially the major difference between the types of labral tears is their location on the glenoid (front, rear, top or bottom). Labral tears can be treated through surgery or naturally depending on the extent of the damage.

Other shoulder injuries include arthritis, muscle/tendon strains, ligament sprains, inflammation of the bursa, bone spurs, fractures/breaks, and cysts. These all have their own treatments but rest, anti-inflammatory medication and RICE method are fairly common throughout shoulder injuries. The shoulder can be operated on by using either arthroscopic or open surgery.

The different types of tears have different recovery times but the across the board minimum I've seen is in the 6-12 week range depending on the type of sport you are trying to get back into and the upper ranges can be 6-8 months. If you hadn't guessed already, football players and other contact sport athletes have the longest projected recovery time of all groups.

Kyle Long has a shoulder...and that shoulder is injured to some extent. Now I'm going to be perfectly honest with you guys. When I research for these articles I'm looking through anywhere from 4 to 10 different sources to cross validate information. I leave it to you guys to decide whether a source, article, video or anything else I link here is credible. That said, while I know SportsMockery links are frowned upon this article, and the tweets by David J. Chao, MD (yes that David J. Chao) found within it, offers a glimpse of both hope and sorrow.

Return for @Ky1eLong @ChicagoBears depends on location & extent of labral tear. Lots of precedent for OL to play with shoulder brace. 1/2

However if @Ky1eLong @ChicagoBears labral tear is posterior, hard to brace & could end end OL season. Fortunately, tears in back more rare.

So with that in mind we now have something to look out for. If Kyle comes back to practice next week with a brace then we have it on pretty good authority he could play while letting his shoulder heal naturally. If he comes back with no brace then either it was likely never a labral tear or the Chicago Bears medical staff needs to be fired, sued and stripped of their licenses. If it gets announced in the next week that he will undergo surgery and be on IR for the season at least you know the likely reason why.

Thanks for dropping by everyone. This was a shorter Fanpost than normal because I only had one player to talk about and I'm getting ready to head out of town for a few days. I'll keep tabs on the final pre-season game and check into WCG occasionally. If any major injuries that I haven't already covered occur to any Bears' personnel I'll make sure to write something up after I get back.

What do you think the truth behind Kyle's shoulder is?