In this installment I will be talking about a number of injuries suffered by Chicago Bears personnel during their Monday Night game. I am not a medical professional. Any estimates on my part regarding recovery time are purely conjecture. Sources for medical terminology, signs/symptoms, treatments and estimated recovery times are:

I was hoping that the lack of injuries during Week 1 would carry through to the rest of the season. Unfortunately that wasn't the case as Monday night was a veritable smorgasbord of injuries for the Bears on both sides of the ball. The majority of the injuries came on the defensive side of the ball but the offense was definitely hit where it hurts so to speak. Well, without further ado, let's get down to the list.

So the injuries sustained that have been covered, in some detail, by previous installments are Adrian Amos and Bryce Callahan (Concussion) as well as Lamarr Houston (Knee). Amos and Callahan are very unlikely to complete the NFL's concussion protocol in time for this Sunday's game against the Dallas Cowboys and even if they are they would most definitely not get any significant amount of practice reps (if any at all).

Houston tore his ACL according to the Bears and was placed on season ending IR. I'm going to be honest, we have all likely seen him in a Bears uniform (or any uniform) for the last time.

Ka'Deem Carey (Hamstring) and Chris Prozinski (Calf) are the latest Chicago Bears to jump on the soft tissue injury train. These injuries vary so much from person to person and there is very, very little way to predict how long they will linger with the minimal amount of details we, as fans, have so I'm not even going to try. If Carey doesn't play on Sunday I may dedicate an entire installment to Hamstring injuries but for now I'm going to focus on some other prominent injuries.

The hand is one of the most complex systems of joints, ligaments, tendons and muscle groups in the entire human body. While there are a number of moving parts involved the overall function of the thumb is governed by four major components.

The metacarpo-phalangeal (MCP) joint is what allows for the opposability of our thumbs and is the first thumb joint, connecting the thumb's metacarpal with the thumb bone and its related phalange (the short, top joint/bone of the thumb). The radial collateral ligament (RCL) connects the metacarpal and the thumb bone on the exterior, non-palm facing side of the thumb and helps provide the stability and strength to keep your thumb open against pressure. The ulnar collateral ligament (UCL) has the opposite function of the RCL and helps to provide stability and strength for gripping. The adductor aponuerosis connects the MCP joint to the various muscle groups surrounding the thumb's metacarpal.

Both Jay Cutler and Danny Trevathan have been diagnosed with sprained thumbs. Since Cutler complained of a weak grip on the ball it is pretty easy to diagnose that as a sprained UCL (grade 1,2 or 3 just like other ligaments). I haven't seen any details on Trevathan's sprain but since this is a fairly common thumb injury it is safe to assume he has the same issue. This type of injury can be treated non-surgically through the use of RICE treatment and a brace similar to what Cutler was seen wearing during the post-game presser. Common recovery period is 2-3 weeks for healing followed by strengthening exercises for another 2-3 weeks. Surgery can be used to fix the ligament damage, with the possibility of hardware being installed depending on the extent of the injury, and a hard cast/splint is worn for 6-8 weeks following the procedure.

In Trevathan's case the surgical option was likely pretty easy to choose since it is a quick, long term fix and wearing a hard cast doesn't affect an ILB anywhere near as much as it would a QB. He will, however, likely face some issues disengaging blockers and INT's will probably be out of the question for a bit. I don't know that they would necessarily "rush" him back into action but I could feasibly see him playing with a cast by as early as week 4 or 5.

Cutler is facing a big decision. He can do a few weeks of RICE and a brace, see how his thumb feels and try to play with a slightly weaker than normal grip strength for a few weeks starting as early as week 5 or he could put himself on the shelf until anywhere between week 8 and week 10 before he takes the starter spot back over (hopefully not for a 2 win team). From a purely unbiased, best for the career of the player, perspective I would suggest the surgery at this point because the likelihood that Cutler comes back "too early" and aggravates the injury is historically pretty high. 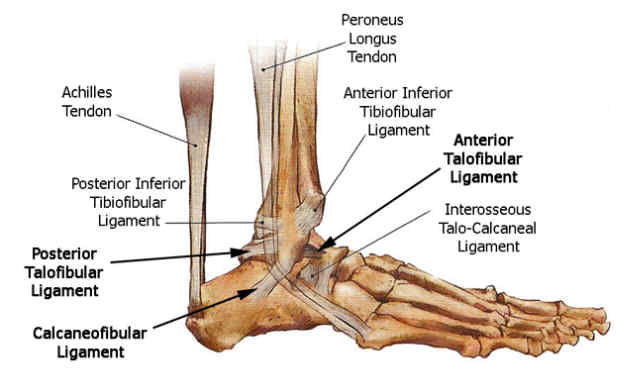 So the foot and ankle are an even more complex system than the hand but since we are talking specifically about the high ankle we can boil it down to two major components. The posterior and anterior inferior tibiofibular ligaments (PIFL and AIFL) are crucial to the stability of the tibia and fibula where they connect to the top side of the ankle joint. This injury is much less common than sprains to ligaments on the outside portion of the ankle but aren't exactly rare in football players. A High ankle sprain is caused by rotational trauma.

Non-surgical treatment consists of the standard RICE method with the addition of a walking boot or other device to protect and immobilize the bones in question and can take as long as 6-8 weeks before the player can return. Surgery can become an option if a fracture or seperation of the tibia or fibula has occured. It generally entails two seperate procedures. The first procedure would consist of reconnecting the damaged ligament to the bone using screws (hardware could also be used to repair fractures or re-secure a seperated bone) and would force the patient to be non loadbearing while wearing a cast followed by a walking boot. The second procedure would be to remove the temporary screws prior to any weight being placed on the ankle. Obviously a leg that is non-loadbearing for several months will require some strengthening and the player would need to get their conditioning back in order before hitting the football field.

Bottom line for Eddie Goldman is the recovery process is not "quick". If no surgery is announced then expect to see him back no earlier than week 6 or 7. If surgery is required he's not going to be back this season.

As always thank you for reading. Let's all send some positive thoughts in the direction of our fallen Bears and try to keep our heads up despite the current troubles facing the team (both injury and non-injury related).

What should Cutler do about his thumb?