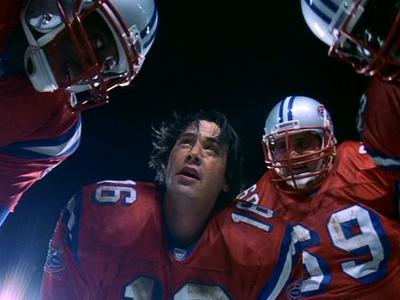 I’ve grown up an avid fan of football. From the legendary days of watching North Dallas Bulls own Phil Elliott nab 3 receptions for 70 yards and 1 touchdown in a heartbreaking loss to Chicago; to today’s transcendent players like Willie Beaman of the Miami Sharks. But of all my football memories, none stands out quite like that when I saw my wife in her cheerleader outfit. A close second to that is of the 2000, strike shortened season that produced my newfound love.

The Sentinels had just finished the previous season in disappointing fashion, dropping a tough game to the Miami Barracuda’s (now Sharks). The league went on to a tumultuous lockout/strike. With that, I felt I had lost the beating of my own heart. I truly felt a sense of emotional distraught akin to Bambi, when his mother was gunned down in the terrible forest riots of ’42.

I spent the next three days on an orange soda and Peep® fueled binge in an attempt to drown out the pain of facing an entire fall/winter in Greenland with no football to watch. After a brief hallucinogenic state, wherein I saw a unicorn salting a giant turkey leg while singing Rick Astley’s "never Gonna Give You Up," I determined to muster on; with or without football.

Thankfully, my pit of despair was filled. At the annual owners meeting, they decided to continue with the season using replacement players. Imagine my elation when it was announced that Shane Falco was going to be the man under center! Falco had 1 bad college bowl game and now was relegated to obscurity. He had been ostracized worse than Rebecca Black; but the man was the most accurate QB in college history since Texas State University's own Paul Blake. So I hedged my bets (my child’s college fund) on the Sentinels as the team to take it home.

As summer gave way into fall, and the pet sea turtles I had rescued returned to the deep, the season was about to commence. The Sentinels started with a lull but had a passionate and committed LB. Bateman would fire off the line with the same spitfire as a rabid dog. Not one of those menacing rabid dogs, more of like a rabid Chihuahua; kind of skittish, and all over the place. Everything turned when Falco exploded in a game against San Diego. Falco led his team to an exciting come from behind victory. I remember sitting next to my space heater, drinking my homemade hooch in an attempt to stay warm, listening to this epic comeback. I breathed deep, mainly because of the hooch; which I must say, if you are going to make hooch, do so in a sterile still. Some rules aren’t meant to be bent. If you don’t believe me when I say it’s trouble, I’ve got a blind left eye to tell you otherwise. So there I was, sippin’ on hooch, when I heard the roar of the crowd as Nigel Gruff kicked the snot out of the ball. End over end it went, straight and true. That was the greatest field goal I had ever witnessed.

I was, soon after, extradited to the US and given leniency on my sentence for my good works with the North Atlantic oceanic creatures. With my new found freedom, I made straight for the nearest tattoo parlor. I had to demonstrate my new fan-hood with the only way one can do so, by emblazoning their logo in my pink fatty flesh. It was sitting in that tattoo parlor when I had heard the crushing news that Martell had crossed the line and the strike was nearly over. My heart raced as I focused on what McGinty would do? Would he start the ever true Martell, or the new ace Falco? Surely, just a few days later, it would be Martell under center for the biggest game of the season.

The Sentinels seemed out of sync; lost really. Heading into halftime, down 17-0, the Sentinels really needed something to cheer them up, to give them a bit a confidence. What they needed was strong dose of Falco. Thankfully, McGinty turned to the crazy gunslinger at half. After my 4th scotch of the half-time show, and eating my first ever urinal cake in a drunken desire for dessert, I was witness to the greatest comeback since Led Zeppelin's performance at 1985's Live Aid. With only 3 seconds remaining, and the score sitting in Dallas’ favor 17-14, Falco sent TE Brian Murphy (The ORIGINAL Gronk) on a beautiful seam route for the go ahead score AND the win!

In those 3 seconds, not only did the Sentinels make the playoffs, but they made it deep into the bowels of my heart.