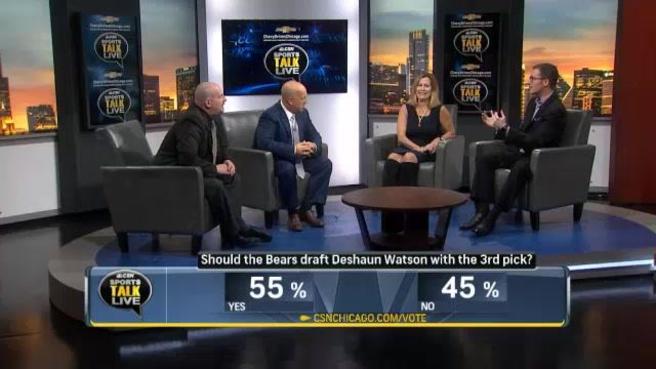 Hello Bears fans! I am a Falcons fan and member of the Falcoholic visiting your blog to share and predict my selections for the 2018 NFL draft. I realize the draft is almost a full year away, but I enjoy drafting, predicting, and the NFL in general so much that I figured I would share my predictions with you guys for the upcoming season. Keep in mind that I have predicted both the record and pick (assuming you have a pick otherwise the team that owns the pick) based on my opinions and by no means do I believe that this will be entirely accurate a year from now. Rather, please view it as an opportunity to discuss with your fellow bloggers the current state of your team, what prospects you like so far, what your projected needs are, etc. heading into this season and looking ahead to next. I realize that my knowledge of your team is obviously less than yours but do realize that I am not trying to be mean or hurtful in any way if you don't like the record or selection I have mocked to you. If you are interested in asking me any questions you can do so on my main article over at the Falcoholic. I don't care what you say about me or my projections here as I will only check in every now and then to see the general gist of your reactions and will not respond to any comments posted below (although I may leave a rec in passing). If you do comment on the Falcoholic I please ask that you be respectful and constructive in your arguments as you will be representing your fanbase to all the other teams in the NFL as well (I'll be posting these articles to every team). To get a sense of how accurate these are or just for fun, I encourage you to check out last year's predictions I made here and click on your team's pick to see how your fanbase responded then. Best of luck this upcoming season and thanks!

After watching the draft I talked to my native Chicago grandfather who has been a diehard Bears (and other Chicago sports) supporter his entire life. I’d never heard him badmouth the Bears once and that night all he did was badmouth and swear at everyone in the Bears organization from the owner to the waterboy. That was the second worst reaction in my family outside of my severely autistic second cousin who reportedly cried all night, destroyed her entire impressive collection of Bears memorabilia going back to the Ditka era, and still has not said a word to anyone since. I can’t say I necessarily blame them too, as the idea to acquire a veteran stopgap and draft a QB to develop is exactly the right approach, but you don’t pay your stopgap over $16 million a year for three seasons and then trade up one spot to get his replacement second overall without getting the approval of your HC. Luckily, the Bears defense did improve, although the loss of Jeffery will likely severely hurt them in the short term even if Kevin White steps up. Defensively they need help along the front seven, and Arden Key is way too good a value at this point to pass up. Key has a rare combination of size and athleticism rarely seen at the position, and he generated consistent pressure on the QB as well. He would be a great fit alongside rising star Leonard Floyd and thus he is the pick here.