For the past few years, the month before the regular season involved an increasingly-elaborate buildup to a Fantasy Football league - nay, multi-league TOURNAMENT - populated entirely by the faithful at Windy City Gridiron. I look forward to the announcement each off-season around this time.

However, it seems the king has abdicated his [Iron] throne, as it's that time of year, but our MC for the proceedings, WhiskeyRanger, could not be reached... for comment, or for any other type of response. We hope this implies a sudden realization of fame &/or fortune, leaving him unavailable for investment into petty trifles like a Chicago Bears fan-driven fantasy football experience. The truth is out there. ...Somewhere.

I'll be gosh-darned (does this qualify as an open thread?) if I'm going to miss out on the WCG Fantasy Football experience entirely. ...Jeff and the crew have thoughtfully provide a buffet of new options that may satisfy many of your interests. For that, we are thankful.

But, if draftin' dudes, pickin' which to play on Sunday, and cussin' when you pick 'em wrong again is a cornerstone of your modern football experience, then have I got something for YOU! 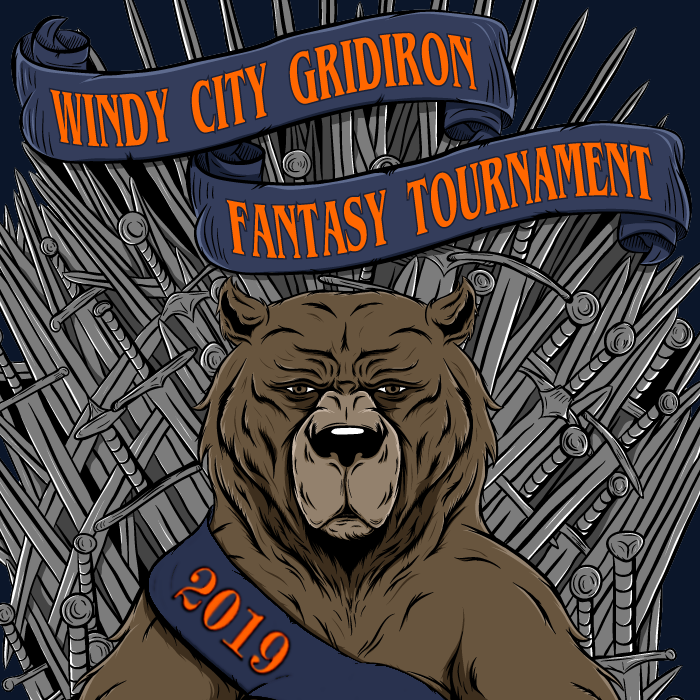 Let me tell you what this league IS:

Let me tell you what this league IS NOT:

Here's a breakdown of the actual league specifics:

Curious about roster configuration and scoring?

If you're somehow still reading, then you're the kind of fantasy football die-hard that belongs in the WCG 2019 Fantasy league! Here's what to do next:
Because the league is only 20-teams at this point, I can't guarantee every past participant would get an opportunity to return, but I'd like at least one prior member in each division -- preference would be given first to the WCG staff who previously managed a league in the WCG Fantasy Tournament in 2018, followed by division winners, etc.
(But, once each division has an established "captain", invite links will be sent out 'FIFO'.)
I'm sure there are a million things to communicate or yet decide in order to carry off this year's fantasy league without a hitch, but honestly, time is running short!

So... let's get twenty armchair GM's signed up, and we'll think on our feet from there.
A good time will be had by all!
Email with your interest, and BEAR DOWN!