Three more sacks allowed to break down, but overall I thought the pass pro from the Bears was decent in Pittsburgh.

Chicago’s pass protection wasn’t perfect this week, but they had their moments of decency and that gave Justin Fields some time to push the ball downfield in Pittsburgh. I shared some Next Gen Stats from the Monday Nighter in this article, but just know that his average of 15.7 air yards per attempt against the Steelers was the second most from all passers in a game this season. We’ve seen what Fields can do with some time in a few games now, and it’s exciting.

Part of the Chicago Bears’ improving pass protection has to do with another rookie, right tackle Larry Borom. The last two weeks he’s matched up against two of the best pass rushers in the entire NFL — San Fran’s Nick Bosa and Pitt’s T.J. Watt — and I had Borom graded out at +53/-9 (85.5%) against the 49ers and a +60/-10 (85.7%) against the Steelers. Watt did get all three of Pittsburgh’s sacks this week, but none of them were the fault of Borom.

I dove into a bit more about Borom in our latest Bear & Balanced Podcast right here.

And speaking of Watt picking up multiple sacks, he’s the ninth player the Bears have allowed to get more than a single sack in a game this season. That has to be some kind of record.

Sack 31 - 1st Quarter 2:50 - T.J. Watt
This was a 1st and 10 from the Bears 43 yard line after they started on their 12, so they had a bit of momentum going. They dialed up a run pass option (RPO) here, but right guard James Daniels gave up the inside path to defensive tackle Chris Wormley. If Fields could have this one back he probably hands it to running back David Montgomery, but he probably assumed he’d have one of the quick throws to the right on this slant/arrow concept based on Pittsburgh’s look.

But the Mike (the first defender that gets circled on the telestrator) doesn’t fall for Montgomery’s fake and that takes away the slant from wide out Marquise Goodwin. Fields immediately looks to go to the arrow route (when the GIF freezes) from his slot receiver Allen Robinson, but Wormley is already on top of him and he looks to escape.

Wormley didn’t get the sack, but his pressure started this play towards disaster, and with the run design going to the the left I have no idea why Daniels opened the inside door here. I have to ding Daniels for at least half of this sack allowed.

Fields is able to avoid the initial pressure, but the hustling Watt cleaned it up. Right tackle Borom pushed Watt past his quarterback’s set before getting hit in the legs by Wormley, so Borom did all that he could do. Especially considering this is an RPO and that ball is supposed to be out. Borom gets no blame on this one.

Some will want to pin part of this sack on Fields for not handing off, but once Fields decides to pull and pass, it’s a passing play. His read was (sort of) right, but the Steelers had a nice rotation on in their secondary. The arrow pass to A-Rob would have been a risky pass with the defensive back drifting in that direction, and that could also have been a reason Fields didn’t try to fire a quick pass there. Also left guard Cody Whitehair may have been illegally downfield had the pass came out (playside offensive linemen all block RPOs like a run play), which is another reason Fields hesitated to pull the trigger.

So with too many what ifs on this play... I’m giving the other .5 sack allowed to Sacks Happen.

Sack 32 - 2nd Quarter 8:12 - T.J. Watt
The only thing that could have saved this play was if Fields would have checked out of it. The Steelers rush five, and neither edge defender seemed to care about the threat of a run on this 2nd and 8 play. The backside edge defender (in this case Watt) isn’t always blocked on these types of play action bootlegs, and I’m not sure if previous scouting made the Bears feel that Watt would be crashing down to chase the running back on this.

Perhaps their advanced scouting told them that with Darnell Mooney going in motion from the left to right, that Watt wasn’t going to come across as hard and fast as he did.

After the snap tight end Cole Kmet was coming form the Bears’ left side, to give a split-zone run look, so perhaps previous scouting made the Bears believe that Watt would at least hesitate and contain which would have given Kmet the time to get a piece of Watt.

Watt either reads this as a play action bootleg all the way, or he was coached to immediately climb on the backside and go straight for the QB on all run actions away from him.

Again, the only way this sack could have been avoided was an audible from Fields, but since I don’t know if the offense was coached up expecting Watt to do something different here, I can’t fault Fields for not checking out of this. Unless Fields took the blame at some point in his press conference that I missed, or the coaches said their rookie QB made a mistake, I’m going to assume this was a coaching faux pas and I’ll put this in Sacks Happen.

Sack 33 - 4th Quarter 7:18 - T.J. Watt
This play was either designed for Fields to make one read then take off, or Fields just decided to run when he saw the green grass in front of him when the quick slant to Kmet was taken away. Either way it’s unfortunate he’s tripped up then stumbles, because that’s all Watt needed to slip the block from Borom and get his third sack on the night.

Borom thought he was still in good position between Watt and Fields as he hesitates to counter Watt’s next move, but when Fields steps up to run through the pocket Watt pounces. An offensive lineman has no idea when the QB scrambles, so they are all assuming the quarterback in set up in the pocket where he’s designed to be. Maintaining leverage isn’t something a pass blocker can do when the defender has his eyes on the prize and the blocker has his back to the passer.

If I wanted to be really nit-picky, I could blame Fields for stumbling and pin this one on him, but the kid was trying to make a play and get some yards in a crucial time of the game... so another Sacks Happen.

And a new feature I’ll continue in Sackwatch this season is tracking the times Fields is sacked, which right now is on pace to be a new Bears record. 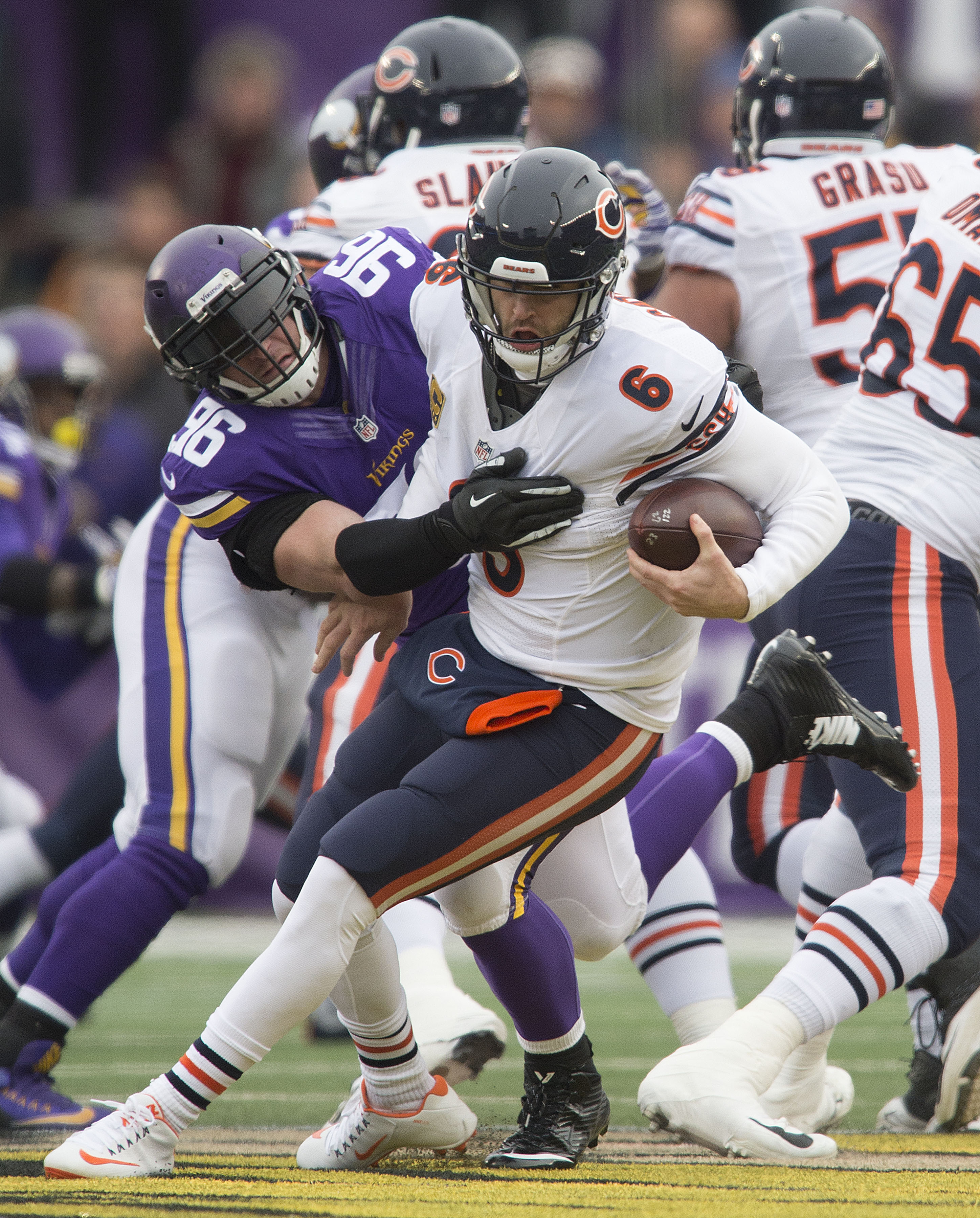 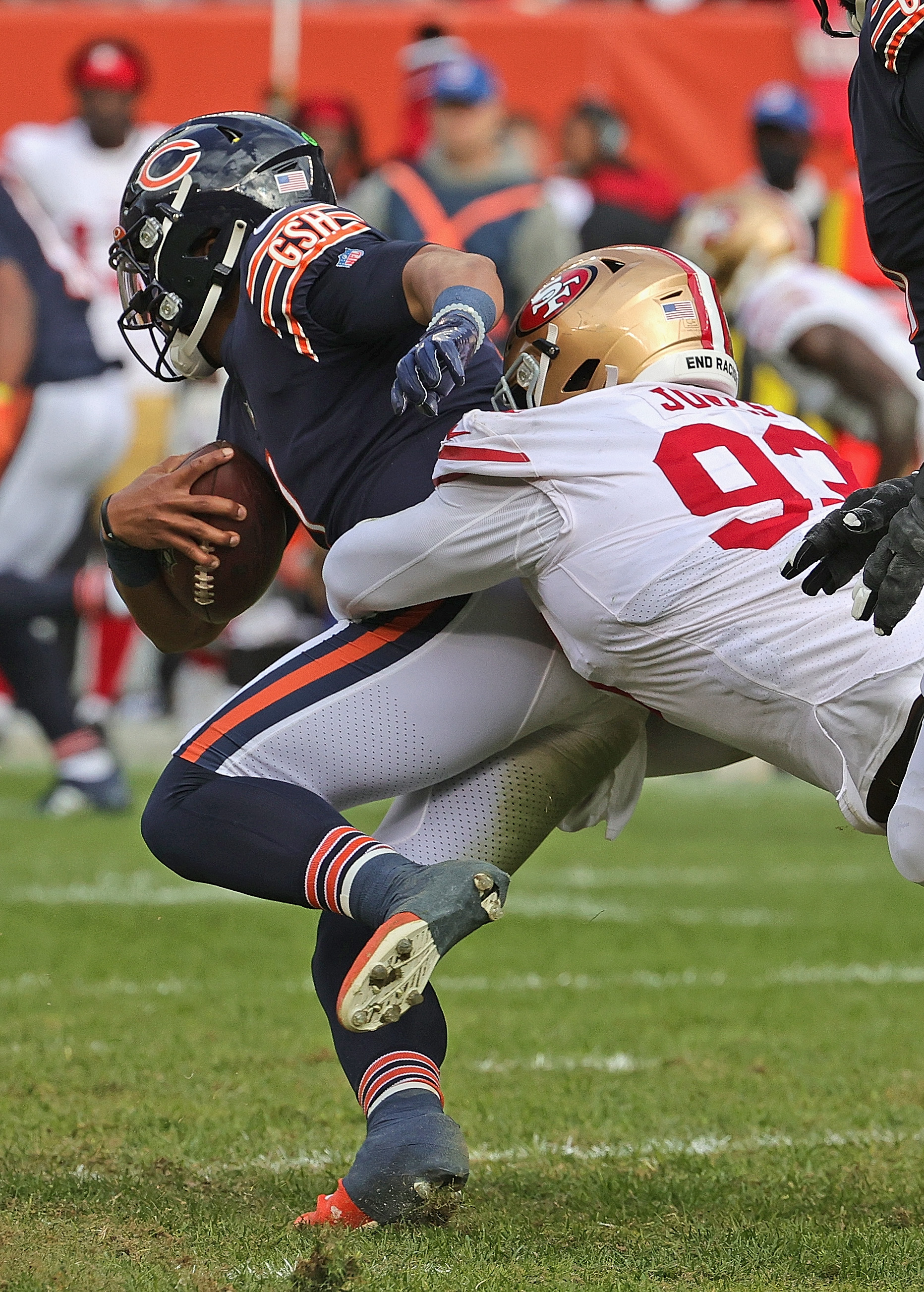 Jay Cutler holds the record for most times sacked in a Bears season at 52 in 2010, and with 8 games remaining in the 2021 season Justin Fields has been dropped 29 times.
Photo by Tom Dahlin/Getty Images and Photo by Jonathan Daniel/Getty Images