Chicago’s sack percentage going down! Is the all-time sacks allowed record still in reach? It’s all broken down here!

The Chicago Bears allowed 3 more sacks on Sunday to the Baltimore Ravens, and they are still on pace to have a worse pass protection than they did in Mike Martz’s first year in Chicago, 2010. That season the Bears allowed 56 sacks, with Jay Cutler getting dropped a team record 52 times, but Chicago’s all-time record for most sacks allowed by the team in a single season is 66 which was set in 2004. That was Lovie Smith’s first year as head coach and his offensive coordinator was Terry Shea.

That season featured a 4-headed QB monster of Chad Hutchinson, Craig Krenzel, Jonathan Quinn, and Rex Grossman, and that foursome was sacked on 12.3% of their pass attempts. This year’s duo of Justin Fields and Andy Dalton is at 11.7%.

Let’s see where the Sackwatch stands historically after 10 games.

And now let’s see what happened on the three sacks the Bears allowed to the Ravens.

Sack 34 - 2nd Quarter 8:33 - Tyus Bowser
The Bears had a 2nd and 5 on this play, they went with an empty set, had Fields in the shotgun, and had him take the snap for a quick set and throw to one of the three hook routes they had on this play. If the pass pro held up he maybe could have hit one of the short routes, or perhaps reset for a deeper shot, but left tackle Jason Peters gave up his inside to Tyus Bowser (#54) far too quickly.

With no drop back from Fields, Peters should have induced his man to the outside around his QB. but he seems to get too deep which opened the door for Bowser.

Right tackle Larry Borom was bullrushed back fairly quick as well, but it was Bowser that reached in and smacked the ball out of Fields hands for the strip/sack, so this sack allowed is on Peters.

But let’s talk about Fields’ ball security. This was his league leading 9th fumble this season, so I would imagine this is a point of emphasis the coaches have been working with him on. His pocket awareness will improve with experience, as will his awareness to keep both hands on the ball when there are defenders circling about.

Sack 35 - 3rd Quarter 14:20 - Justin Houston
This is a tough one, because it really does seem like Fields looks to take off too soon. On the CBS broadcast Tony Romo says that Fields could have waited a tick longer and hit tight end Jesse James down the right sideline after he ran an out and up form the right tight end position. There wasn’t a lot of separation from the 6’7” James, but he had a step and a size advantage on the 6’3” Bowser. A well placed ball could have led him into a catch down the sideline, but Fields didn’t wait for it to develop.

Fields’ first read seemed to be Darnell Mooney who was the slot receiver on the left, and if that’s the case then it seems like Mooney should have taken his route under the coverage towards the sideline, but he runs towards linebacker Josh Bynes (#56).

The pass pro was decent here with running back David Montgomery picking up the blitz after the fake, and left tackle Peters handing outside linebacker Justin Houston (#50). Peters had his guy under control until Fields tried to run, but there’s no way for Peters to keep his leverage with Fields on the move.

Since I’m not entirely sure how Mooney is coached on this route, and since there’s no way to know for sure what would have happened had Fields gave the play a bit more time before trying to jet up through the pocket, I’m putting this one on Fields.

Sack 36 - 4th Quarter :04 - Tyus Bowser
This was a Hail Mary situation and Baltimore rushed four while dropping everyone else back. The Ravens ran a little stunt inside but it was Bowser that picked up his second sack of the game getting past right tackle Borom, but Borom was just pushing Bowser back behind where he thought Dalton would be.

Dalton seemed to drift back a a bit too far on what should have probably been a five step drop out of the shotgun. He then tries to escape by getting even deeper, which puts himself in the sights of the defender who is just working the edge as fast as possible. Dalton probably should have stepped up, but at this point he’s just trying to buy time for his receivers to get to the end zone. He’s not athletic enough to evade Bowser by going around him and out to the right, so I have to get a bit nitpicky and ding Dalton for drifting back on the Hail Mary.

Sure it takes more than 4 seconds for Chicago’s pass catchers to traverse the 50 yards downfield to get into position, but Dalton ran himself into this sack.

EDIT: After finally having a chance to look at the All-22, I’m splitting this sacks allowed between Dalton and Borom. Dalton’s sloppy drop led to the sack, but Borom gave ground up into the pocket too quickly.

The #Bears have allowed more than 1 sack to 10 players this year.

With Justin Fields set to miss Thursday’s game in Detroit, that’s one less game for him to get Chicago’s all-time record for being sacked in a single season. 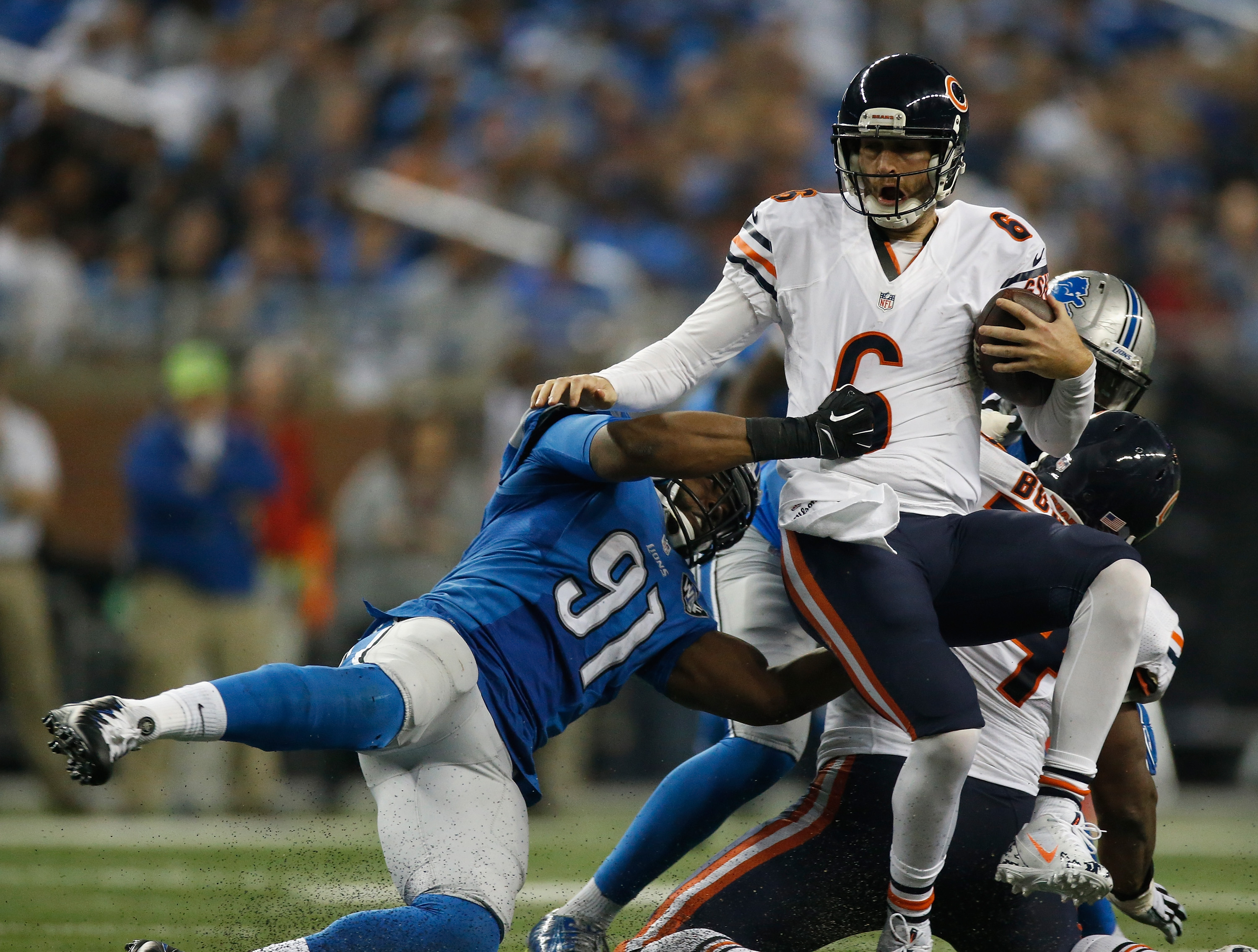 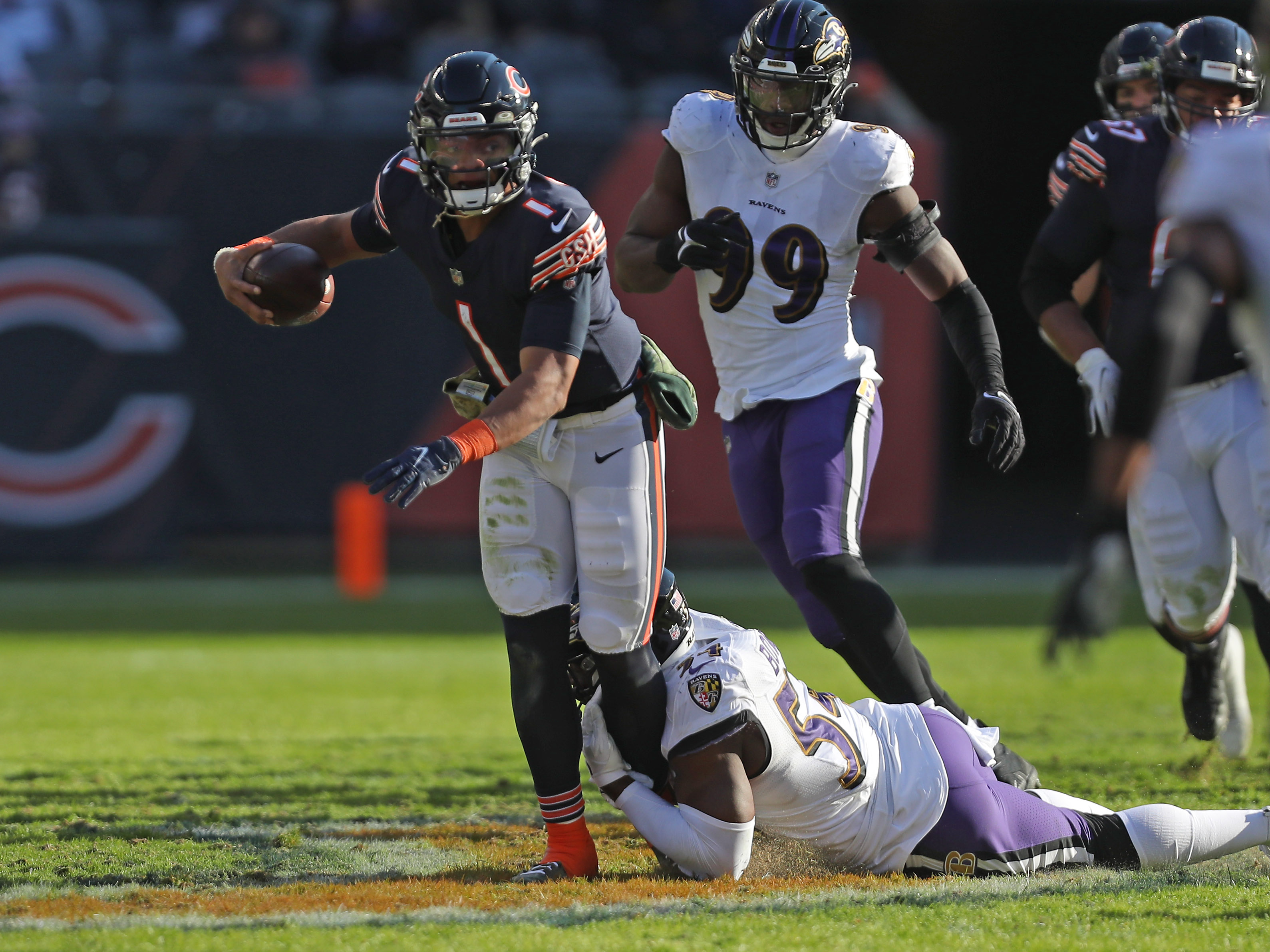 Jay Cutler holds the record for most times sacked in a Bears season at 52 in 2010, and with 7 games remaining in the 2021 season Justin Fields has been dropped 31 times.
Photo by Gregory Shamus/Getty Images and Dennis Wierzbicki-USA TODAY Sports