It wouldn't be an NFL offseason without fans clamoring about their teams' personnel moves. The hope of finding a gem in free agency. The pain of losing a beloved member of your favorite squad. Confusion when general managers make moves that fans cannot seem to understand.

The Chicago Bears offseason has been particularly drama-filled. For those who may not have been skimming Twitter on a daily basis, there was this big rumor going around about the Bears trying to make a move for Russell Wilson. In fact, reports indicate that the huge offer Ryan Pace made to acquire the Super Bowl-winning quarterback was accepted by the John Schneider, the GM for the Seattle Seahawks, but in a backwards twist of power, Head Coach Pete Carroll blocked the trade. After weeks of hearing that the Monsters of the Midway were closing in and watching betting odds continue to shift towards Chicago's favor, nothing. The city was anticipating this move so much that when Pace was forced to move on and go for an upgrade at QB by signing Andy Dalton (which IS an upgrade, we could do an entire article on this), the fanbase was outraged. Disappointment ran down the streets of the Windy City, filling up airwaves on nationwide television and radio stations, and plaguing social media as if Pace had waved his staff and brought the locust down as a punishment.

Then, 24 hours later, the news broke again. The Bears would be releasing Kyle Fuller and agreed to allow Akiem Hicks to pursue a trade.

An already irate fan base was ready to burn down Halas Hall. I'll admit that when I first saw the news, which came in the form of my closest friend texting me "F***ing H*ll, Fuller just got cut," I also felt pain. Fuller has been an integral part of this team and defense for years. He was homegrown talent. He'd been through ups and downs and he had finally figured it out, and what's more, has constantly been named as a key reason our other members of the secondary found success in film study and learning the game.

From that text, I began staring at news feeds. I saw everything else break in what I can almost say is near-real-time. I read the Fuller cut notice and immediately wondered why we couldn't trade him, then thought of the maneuver that the Raiders used to trade Rodney Hudson to the Cardinals. It came out they were releasing him, then overnight they found a buyer in Arizona and a third-round pick. Pretty good return on a guy they were planning on releasing. I expect that at some point today, we will also see news that someone is acquiring Fuller via trade. His return value is a complete mystery to me at this time. He's not a roster issue like Marcus Peters was considered to be when the Chiefs traded him and a sixth-round pick to the Rams for a fourth-round pick, but that's probably the most recent example of this kind of move.

Hicks will be even more painful for me to see move on. His energy and appetite for the game are contagious. He's a literal bear on the field, and his rare combination of size, strength, and technique will be difficult to replace. However, Hicks has been more injury prone the last few years, and I personally think he's on the downtrend at his age. I would expect the return for Hicks to be similar to what the Ravens got for Calais Campbell, a fifth-round pick.

Bears fans are outraged. I'm not going to say that their anger isn't justified, but I will say that once the dust settles, all of these moves make sense, regardless of how you feel. This isn't a defense of Pace, as his QB history isn't something to be thrilled with, but this is an attempt to understand the motives behind these moves. Here is what I think.

Here's a quick chart for reference from OverTheCap.com: 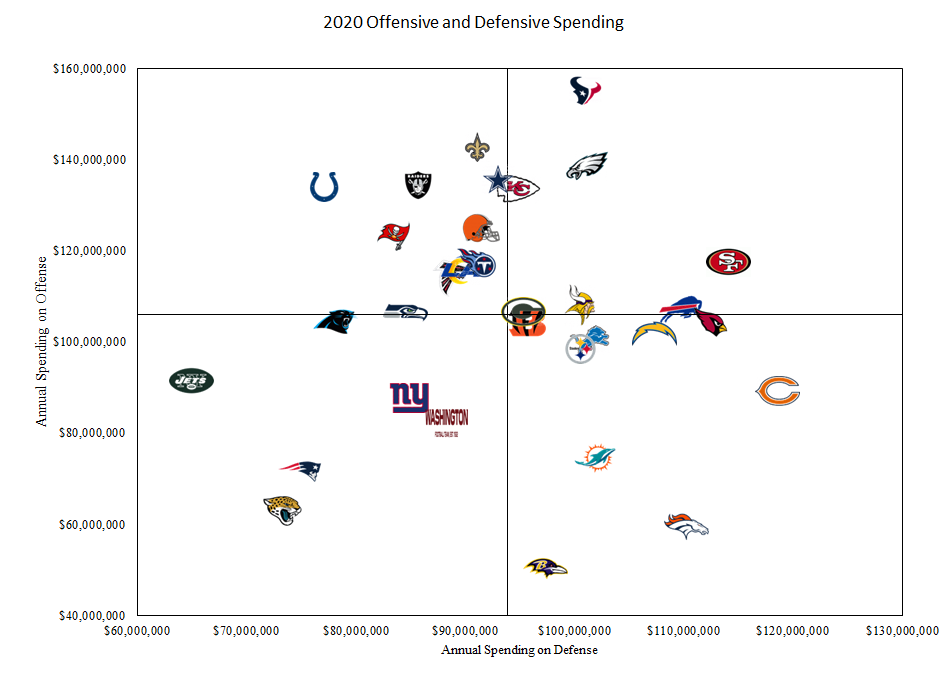 In short, the Bears were spending more on defense than any other team in the NFL last year. Despite that, they were not the best defense in the NFL statistically. Much of that could be attributed to being on the field for long periods of time, coaching, offensive ineptitude, and other factors, but that reality still exists. Now take a look at where the most successful teams are. They are much closer to the middle and have a more balanced approach via cash-spending to their team-building efforts. Much of this comes with finding success in the draft and timing. These teams will all be in various new places on the chart next season, but there is no doubt that a balanced approach will usually carry better results.

The other truth that must be stated is that barring your defense being a generational unit, a la the Amazon Alexa-approved Greatest Team in NFL History 1985 Chicago Bears, defenses no longer win championships the way they did before. The modern NFL is going to look less like 17-10 defensive struggles and more like 42-38 offensive shootouts. The NFL has seen a steady increase in the number of points scored over the last 30 years, with 2020 being the first year ever that teams averaged over 24 points per game.

So in a year where the cap is down, and you are committing roughly 1/6th of your total cap space to Fuller and Hicks, two of your older defensive stars, why not move on from them when the time is right and attempt to revamp the offense with savings made?

Every team has to eventually move on from known defensive talent. Kansas City has moved on from Marcus Peters, Eric Berry, Derrick Johnson, Dee Ford, and Justin Houston in the last 5 seasons just to continue improving the team. It's rough on a fan base, but it's the right long-term move.

Here's the part where Dalton fits in. It's no secret that the Bears needed an offensive overhaul, and it's even less of a surprise that it started with finding an answer at QB. I believe the plan to addressing that position, based on Pace's previous moves and tendencies, looked like this:

1. Try to trade for a known quantity and superstar

a. They almost landed Russell Wilson, and also inquired about Deshaun Watson and Derek Carr.

b. This solution was the quickest reset of the offense. If they did this, I think they do everything in their power to work with Fuller and Hicks to keep them around for one more year to make a run, but I'm not 100% sure.

c. I'm not sure how much I buy into this, but don't be shocked to continue to see reports that the Bears are keeping tabs on Wilson leading up to the draft. I put very little stock into Wilson moving at this point.

2. If (1) fails, target your favorite QB in Free Agency and shed defensive dollars to augment the offense.

a. Andy Dalton was the best free agent quarterback available. At least one rumor suggests that San Francisco really wanted Dalton, as they believed he would be an improvement over Jimmy Garoppolo.

b. We were always letting Mitchell Trubisky walk, and Dalton would be an improvement over both Trubisky and Nick Foles.

c. I'm not convinced we do trade Foles, but I would not be shocked to see us move him closer to the draft. I'm looking at Denver as a potential landing spot to help Lock and push him.

d. Strengthen the offense. They've already lucked out and Allen Robinson has accepted his franchise tag. Reports are out that the Bears are targeting Golladay as another WR addition. I would expect more news on the offense in the coming days as the aim is to make it harder for defenses to stop an offense led by Andy Dalton.

3. Plan for the draft and have two targets.

a. This is where the plan HAS to come together. I've gone back and forth on this, but I truly believe Pace is going to be as aggressive as he always has been when attacking a weakness. Glennon/Trubisky in 2017, the Mack trade in 2018, trading up for Montgomery in 2019, and signing Graham/drafting Kmet in 2020. I don't expect Dalton to be the only move we make here.

b. I expect Pace to trade up. I also expect that he will let Nagy pick his preferred player. If Nagy can nail his QB evaluations this year as he did in 2017, we would be in very good shape moving forward. I'm not sure how much they would be willing to give up here, but I won't be surprised by anything.

c. If no one budges or accepts their trade offers to move up, and no one they like comes down the board to a reachable range, I expect they will go BPA between CB and OT in the first round and look at QB options in the second and third. Names like Davis Mills, who John DeFilippo just saw up close at Stanford's Pro Day, will be on this list.

4. Go into training camp with the plan for Dalton to start and develop the rookie, UNLESS the rookie blows everyone away.

That is what I believe the plan is for the Chicago Bears offseason. I do not claim to have any inside sources here, I'm only thinking through this as logically as I can. The Chicago Bears couldn't hope to continue relying on an aging defense to carry their victories, offensive overhaul was the only path forward to competing with the best in the league. I can only hope that whatever plan the Front Office has improves this team and shows us reasons for hope in 2021.