The Buffalo Bills demolished the Chicago Bears in Mitchell Trubisky’s triumphant return to Soldier Field. He led the team to 4 consecutive touchdowns, scoring 34 points in the first half. Andy Dalton played the first half on the Bears side, and only scored 6 points. It was an embarrassing (or should I say "em-bear-assing") first half for the Bears. The second half was much brighter in some parts, but still wasn’t great. The whole game had both high and low spots, even putting aside the fact that score doesn’t matter in preseason. So let’s take a look at those highlights and slumps (lowlights???) from Saturday’s game: 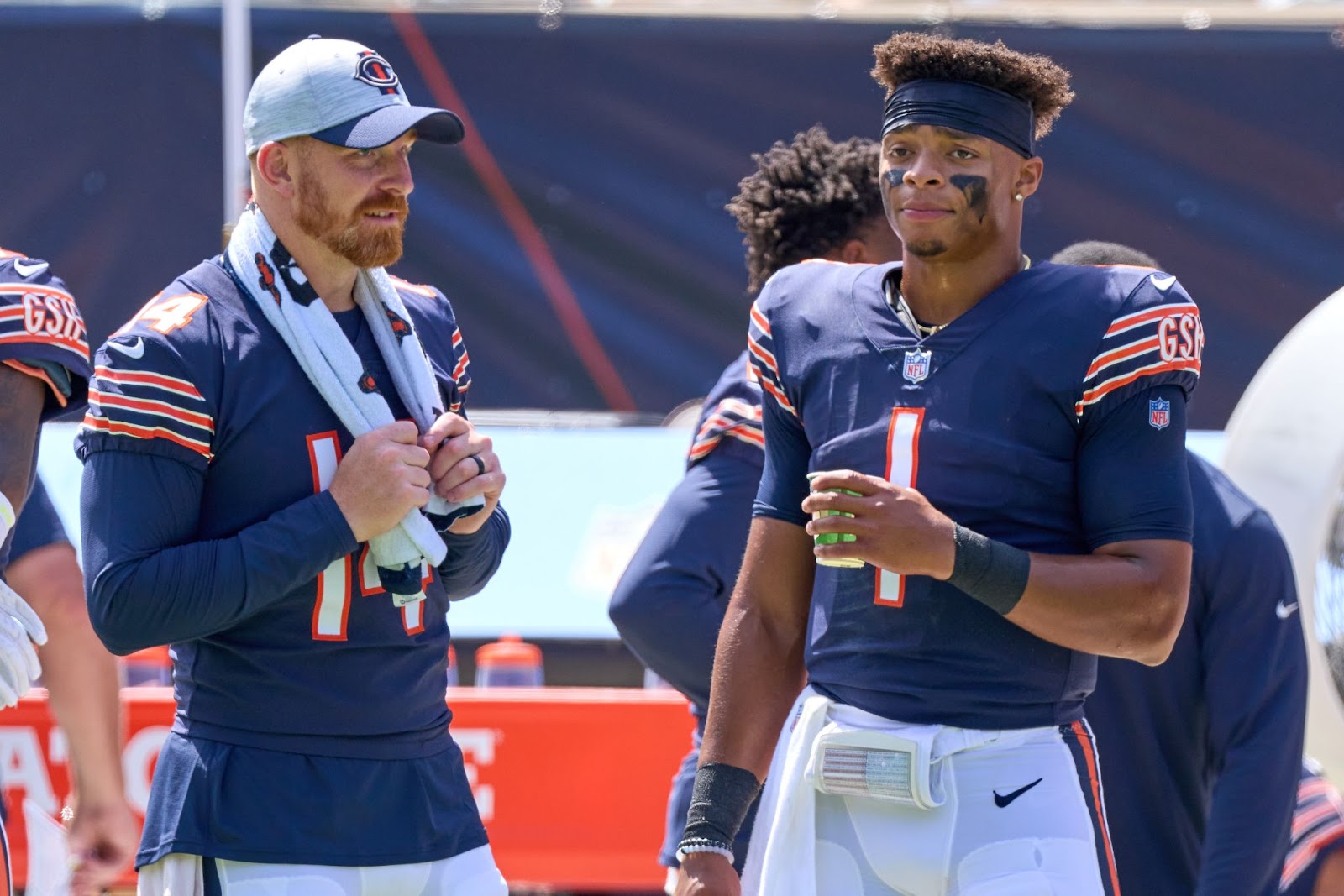 Offense can really be separated into halves here, with some better aspects in the second half, and fewer in the first. They weren’t able to convert once on 3rd down (0/11), and generated under 300 yards of total offense. They gave the ball to the Bills frequently, be it by turnovers, downs, or punts (and bad tackling on said punts).

The Dalton Offense (first half): 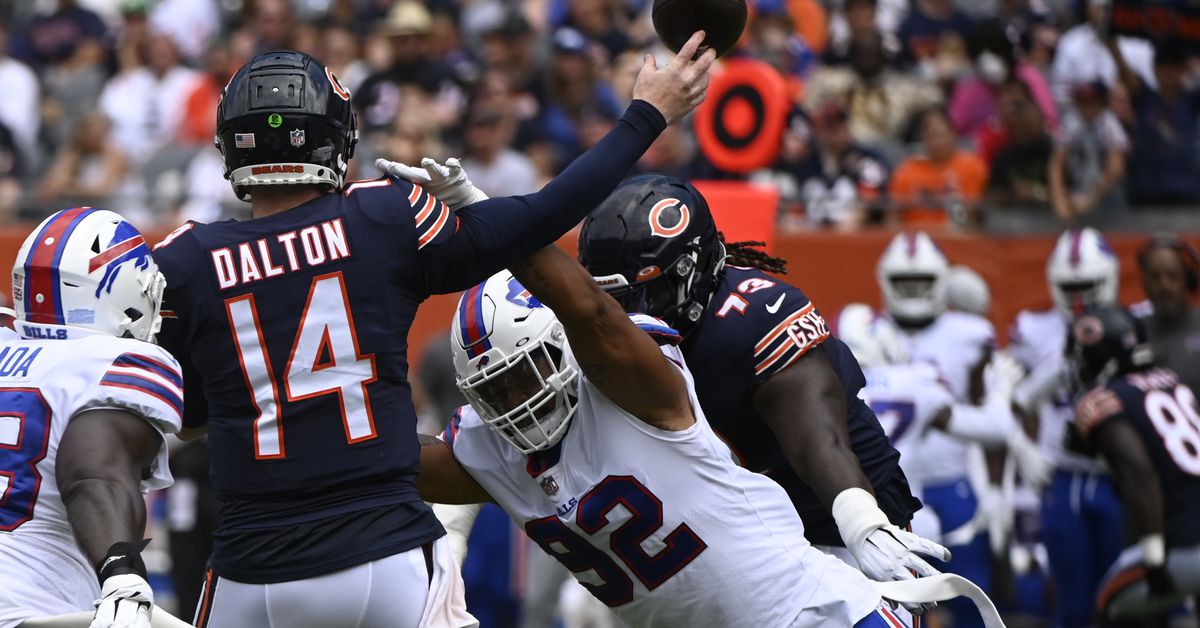 Like last week, the Andy Dalton Bears offense was utterly lifeless. Once again, the Bears started slow, and took their time getting a first down. Dalton went 11/17 for 146 yards (8.6 YPA) with a TD and an INT, scoring an 86.9 QBR. Damien Williams ran for 8 yards in 5 attempts, an average of 1.6 YPA. His longest run was just 3 yards. At WR he got a 2 yard reception on one catch… on 3rd & 17 from the 5 yard line. He also lost a fumble. Though Mooney, Goodwin, and Wims got 2 snaps each, the WR position was a disaster. There were few open receivers, frequent drops, and good defense with plenty of pressure on Dalton. At TE, Kmet and Holtz were held out, giving Graham and Horsted most of the snaps. Though Riley Ridley and Damiere Byrd were on for a majority of the snaps, they only got a combined 2 receptions, earning 16 yards. The offensive line situation was half-decent. They allowed a handful of hits and quite a few pressures, but prevented too many sacks. The one highlight was a Rodney Adams catch over the helmet of a CB, which he took to the endzone for a 73-yard touchdown, celebrating by cradling the football like a baby, signifying the birth of his newborn daughter within 24 hours of his touchdown (he slept on the couch at the hospital) 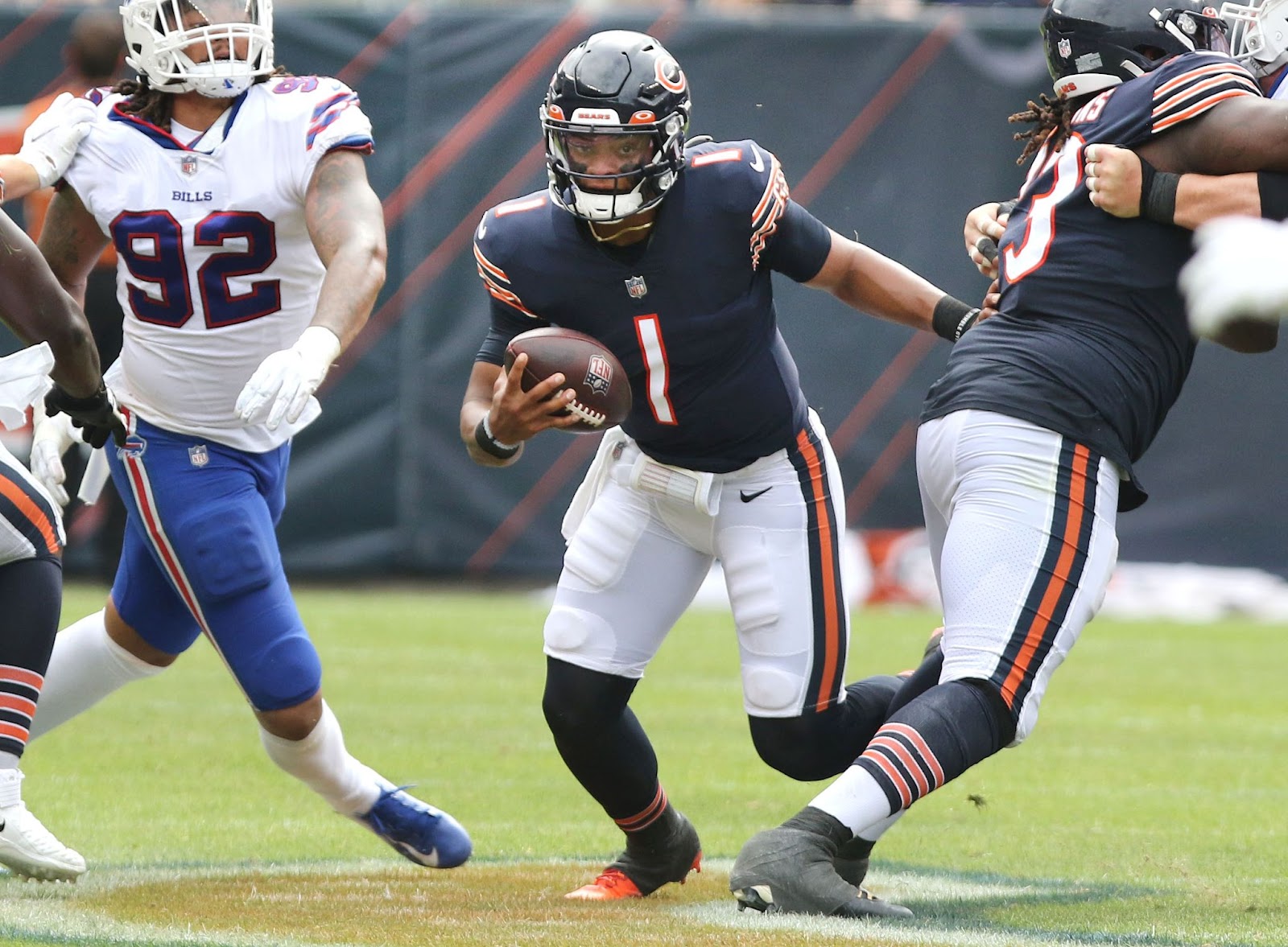 Though the same receivers were on the field, Justin Fields’ offense provided us with a more refreshing second half. Though the O-Line play was worse (thanks to worse o-linemen), and he still couldn’t generate any 3rd down conversions or more than 9 points, there was an energy, a liveliness, that wasn’t present under Dalton, or even Foles last year, which seems to be a recurring theme with Matt Nagy. There were still a handful of drops from wide receivers, making Fields 9/19, totaling 80 yards for an average of 4.2, with a 59.1 rating. He also led in rushing yards for the day, with 46 of them in 4 carries. Pierce was the main RB, with 4 carries for 12 yards total, though Herbert got 3 carries for 15 yards and a 13 yard TD. Fields had a great long pass to Jesse James early on, and had another one to Adams, which resulted in a drop. We saw his first few passes to Chris Lacy (3 rec., 26 yards), and a good one to Jon’Vea Johnson which was later ruled incomplete. There were plenty of sacks, and even more pressures, including one that knocked Fields’ helmet off (he’s absolutely fine after the hit though). The worst O-line positions were on the right side, with Simmons (who played every single snap), Eiselen, and Wilkinson (who played mostly in the first half). Larry Borom looked a lot better, and Redmond has a chance to be rostered with his strong play at C. Jesse James was another reception leader, with 4 catches for 56 yards. 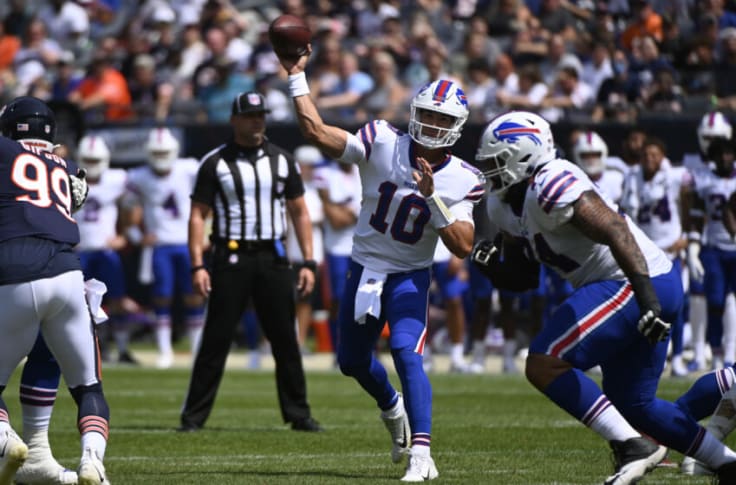 Like the offense, the defense also had very different halves, with the first on looking useless and the second slightly better, but not amazing. 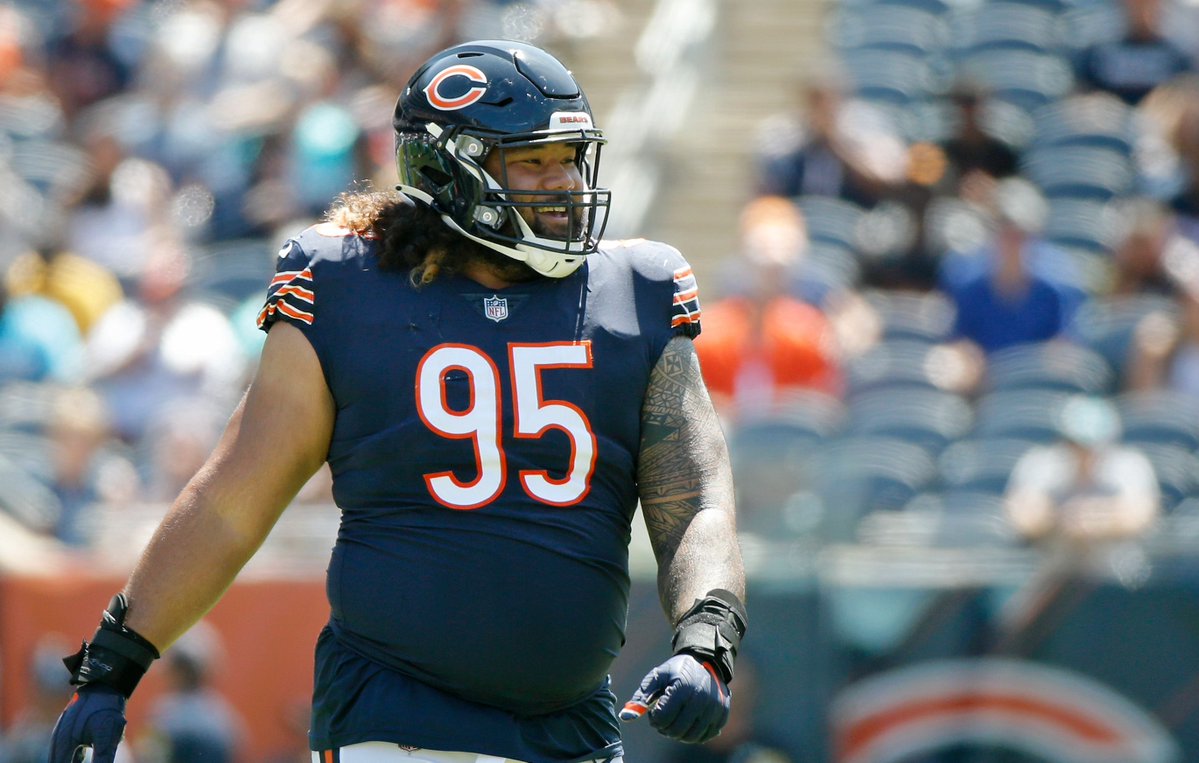 Mitchell Trubisky absolutely annihilated the first team Bears offense. He targeted players covered by the less experienced DBs, Kindle Vildor and Duke Shelley, who each had a decidedly less dominant day than last week. ILB play the first half was decent, with Smith and Trevathan out. Christian Jones had a good day a week after Ogletree’s, and seems to have solidified a roster spot. The one highlight of that half was the defensive line. Khyiris Tonga led the unit with a strong force in the middle, and Vaughters had some good pressure on Trubisky. Jaylon Johnson was the one good CB that half, with 2 blocked passes on 3 passes to his coverage. Still, they allowed over 290 yards and 34 points from the likes of Trubisky, Singletary, Breida, and McKenzie. It was mostly the second team in the game. 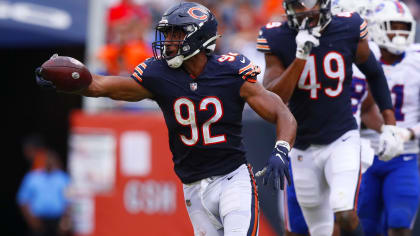 The second half was much better for the team, especially players like Trevis Gipson, Marqui Christian and Caleb Johnson. Johnson is making a case for himself to be the 5th ILB, or even topple Ogletree or Jones. He recorded 3 tackles and recovered 2 fumbles. Christian did well too, leading the team with 5 tackles (and 1 assist) as well as a blocked pass. Trevis Gipson was a leader in tackling as well, with 5 solo tackles and a forced fumble. The Bears recorded 4 total sacks (2 by Mario Edwards) and saw significant improvements in CB play from Graham Jr., Crawford, and Burns. Teez Tabor also stayed strong at safety, paired with Christian. It was much better all around for the unit that half, and they held the Bills to only 7 points, 50 passing yards, and just a few rushing yards. 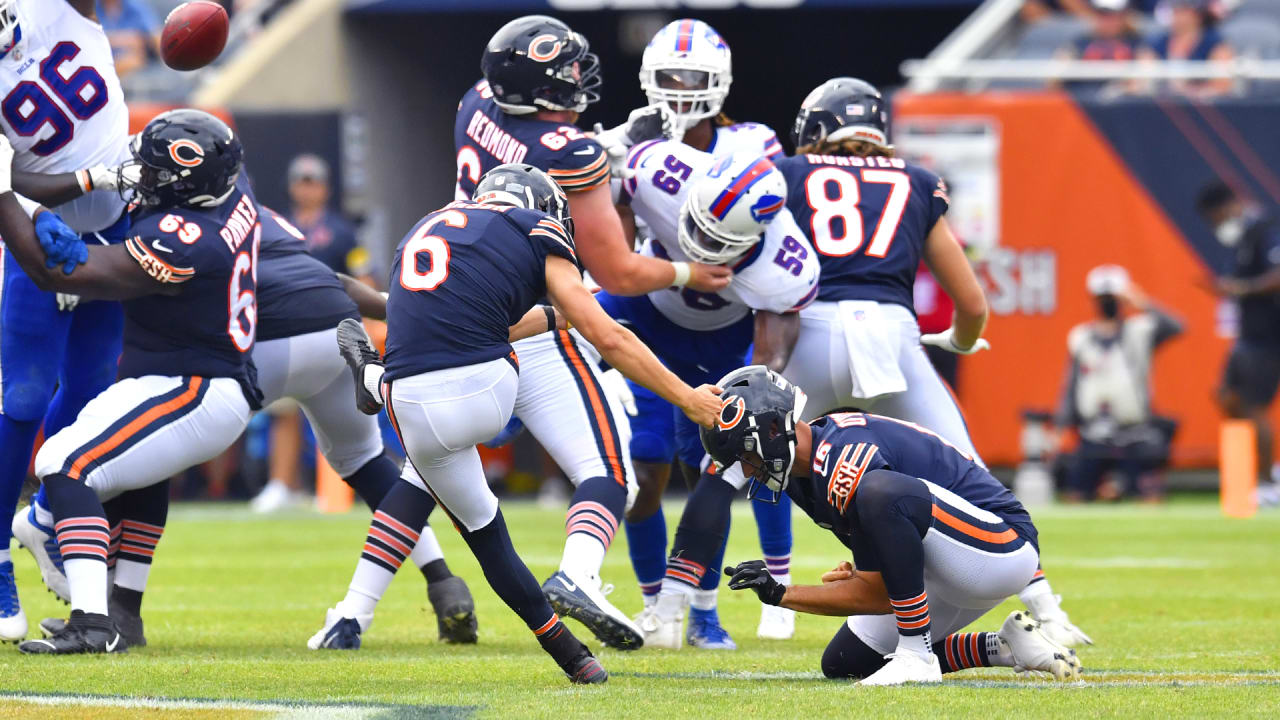 The story is the same today as it was last week, if not worse. The Bears can’t make tackles on punt returns. They allowed 150 yards on punt returns alone (of which there were 5) including one of 35, and an ugly 79 yard TD return for Marquez Stevenson. They also allowed 45 yards of kick return on 2 attempts, though Caleb Johnson landed a nasty tackle, using another player as a domino in the open field, sending the returner flying. The Bears didn’t fumble any returns this week, and rookies Newsome and Herbert were the only players to make returns. Newsome averaged 6.5 yards per return on 2 returns (plus a fair catch), and Herbert averaged 18.8 return yards on 4 attempts, with a long of 24 (the number he wears). On the punting side of things, Pat O'Donnell had a lot more punts, including another 63 yarder. He added another 5 punts to his 7 from last week, and his average remains just above 55 yards per punt. In the kicking world, Cairo Santos saw a kick hit the crossbar and back onto the endzone after a tip at the line of scrimmage on an extra point attempt. Brian Johnson continued his great play with a 54 yard FG. Hopefully the Bears can trade him for some picks, an o-linemen, or some decent WR depth.

Players on the rise: 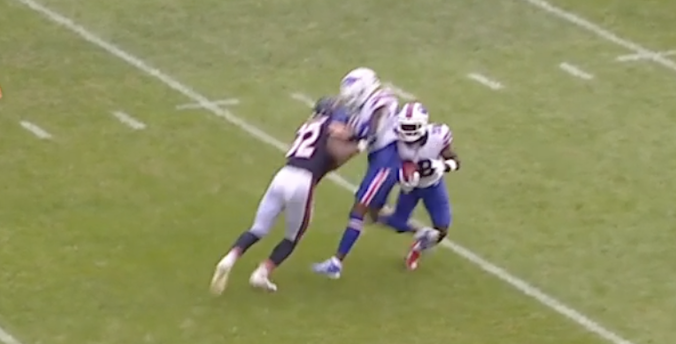 Plenty of players deserve something more than where they are on the roster at the moment. I think both Marqui Christian and Teez Tabor definitely deserve a chance at safety. They’re both good bets to compete with Deon Bush and DeAndre Houston-Carson. I also saw some good play for both Thomas Graham Jr., who nearly scored a pick 6, and for Xavier Crawford, both of whom could compete with Shelley for the start at NB. Larry Borom and Adam Redmond also did well, and I believe it’s probable that Borom moves to RT, and Redmond to a lower spot at RG. Rodney Adams is a player I expect to be the WR 4, with over 150 yards in 2 weeks. Jesse James and Khalil Herbert are another two players on the come-up to watch. 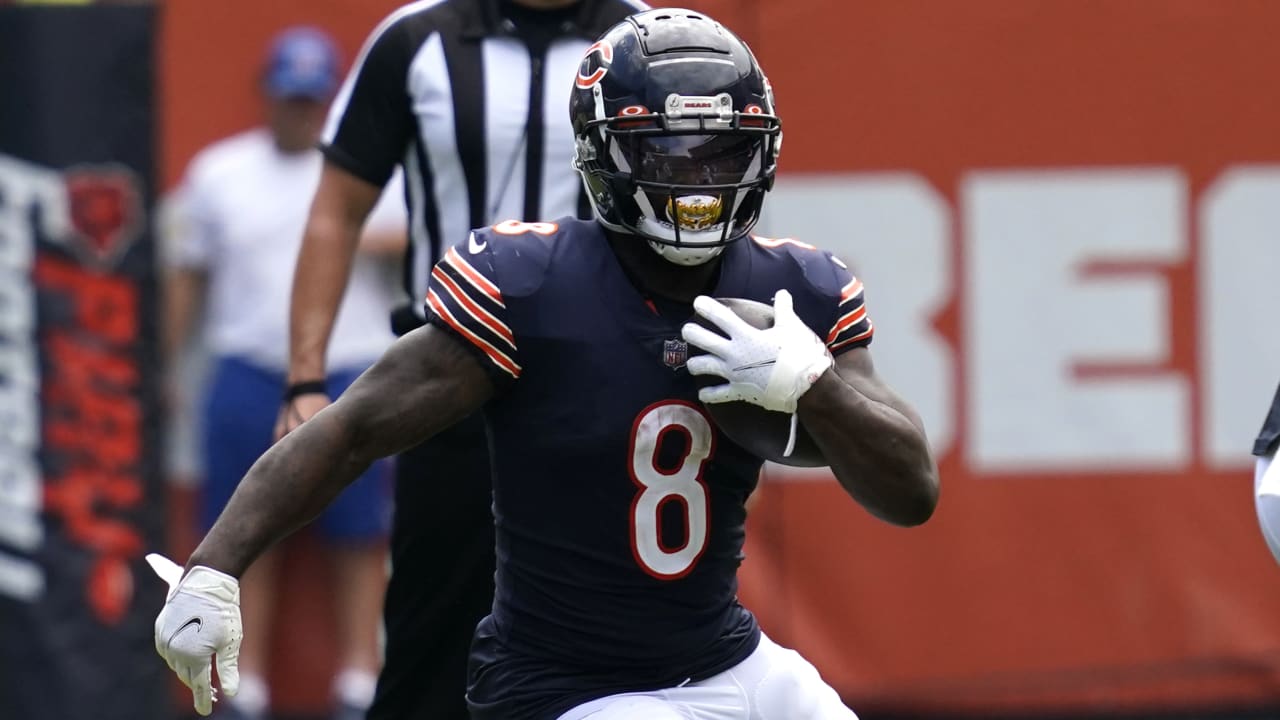 Damien Williams is just one player deserving of a demotion. I’m not sure I can stomach his constant 2 yard gains. I also don’t know how much longer I can watch Elijah Wilkinson blow coverage at LT (though Peters is expected to start there next week). While Dieter Eiselen and Lachavious Simmons did well last week, this one was significantly worse. The story is the same with Kindle Vildor and Duke Shelley, though I do want them where they are on the depth chart. I also don’t like seeing Riley Ridley out on the field. He’s a sucker for dropping passes, and just being missing. I want him to make more room for Jon’Vea Johnson and Dazz Newsome. Chris Lacy also doesn’t need as much time on the field, though I’d like him to play a bit more. Jeremiah Attaochu is currently listed as a 2nd string OLB, but I expect Trevis Gipson to pass him in that respect. He just hasn’t done much. 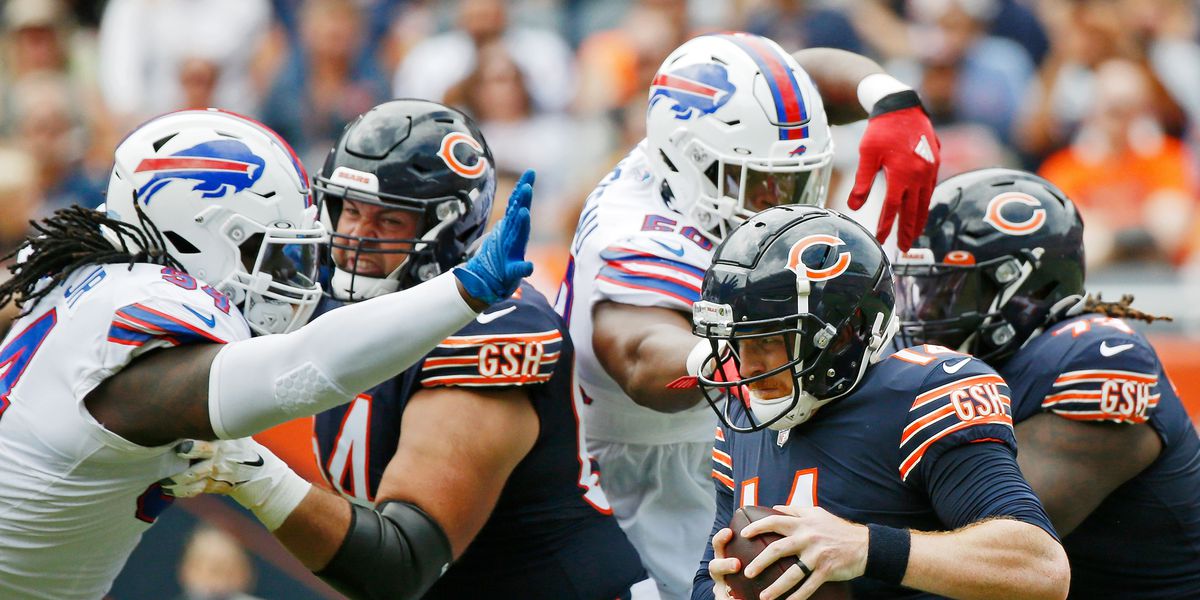 I certainly hope we learn a lot from this game as a team. Having Daniels back, and Peters in the rotation should help. We had a bad week at camp before this game, maybe we can get back on track here. Move some pieces around in the depth chart. We have to cut another 5 players by Tuesday, maybe we’ll see something better on the field next week. Hopefully Fields can play with the 1s. However, Matt Nagy stated yesterday that he can’t decide on when Fields would start, and "wants to see Dalton play a few regular season games" before making that decision.