The Bears only allowed 2 sacks against the Dolphins!

The Chicago Bears only allowed two sacks to the Miami Dolphins last Sunday, but Justin Fields is still on pace to set the Bears’ all-time record for getting sacked in a season. That record is held by Jay Cutler in 2010 when he was dropped 52 times.

But some positive Sackwatch trends as Chicago’s league-leading sack percentage is down again this week, from 16.3% to 14.9%, and the Colts now lead the league with 35 sacks allowed after the Patriots got Indy QB Sam Ehlinger 9 times.

Also, the Bears’ next two opponents, the Lions and Falcons, have only 12 sacks each, which is the second fewest in the NFL, so Chicago’s pass protection could stabilize and gain some confidence these next two weeks.

Sack 32 - 4th Quarter 4:36 - Melvin Ingram
I’ve liked the overall play from rookie left tackle Braxton Jones this season, but his bad tape has been really bad. The good news, however, is that most of his miscues all stem from the same thing, which means it’s something he and the coaches can zero in on in the offseason. The bullrush has given him fits all year, and while that’s somewhat of a technique problem, it’s mostly a core strength problem.

“Next spring, he (Jones) will participate in a full NFL offseason program and further develop his lower body strength and power,” our own Greg Gabriel says of Jones, “allowing him to anchor much better than he is this season.”

Melvin Ingram drives through Jones on this play in just over 2 seconds and slips under the block for the sack. Fields does have a receiver, N’Keal Harry, running a delayed slant to his right, but as soon as he wanted to fire the ball, he seemed to sense the pressure from Ingram and braced for the hit.

Jones just needs to anchor for a split second longer, and this could have been a positive play, so this one is on the rookie.

Sack 33 - 4th Quarter 1:42 - Duke Riley
Not all run-out-of-bounds sacks are created equal, and this is an instance where I think Fields made a fine decision by just going out of bounds. The Bears were under two minutes in the game with only one time-out remaining, so Fields’ mindset was on getting out of bounds if he scrambled.

This was a two-man route, and Fields had no one open downfield, so he darted to the sideline. Sure a flip out of bounds would have stopped the clock as well, but Fields had been running so well on the day he probably felt confident he’d be able to break contain. He couldn’t get the edge around the chasing spy, Duke Riley (#45), so Fields ran out. A loss of two yards here wasn’t a big deal, but this is still on Fields for taking the sack. 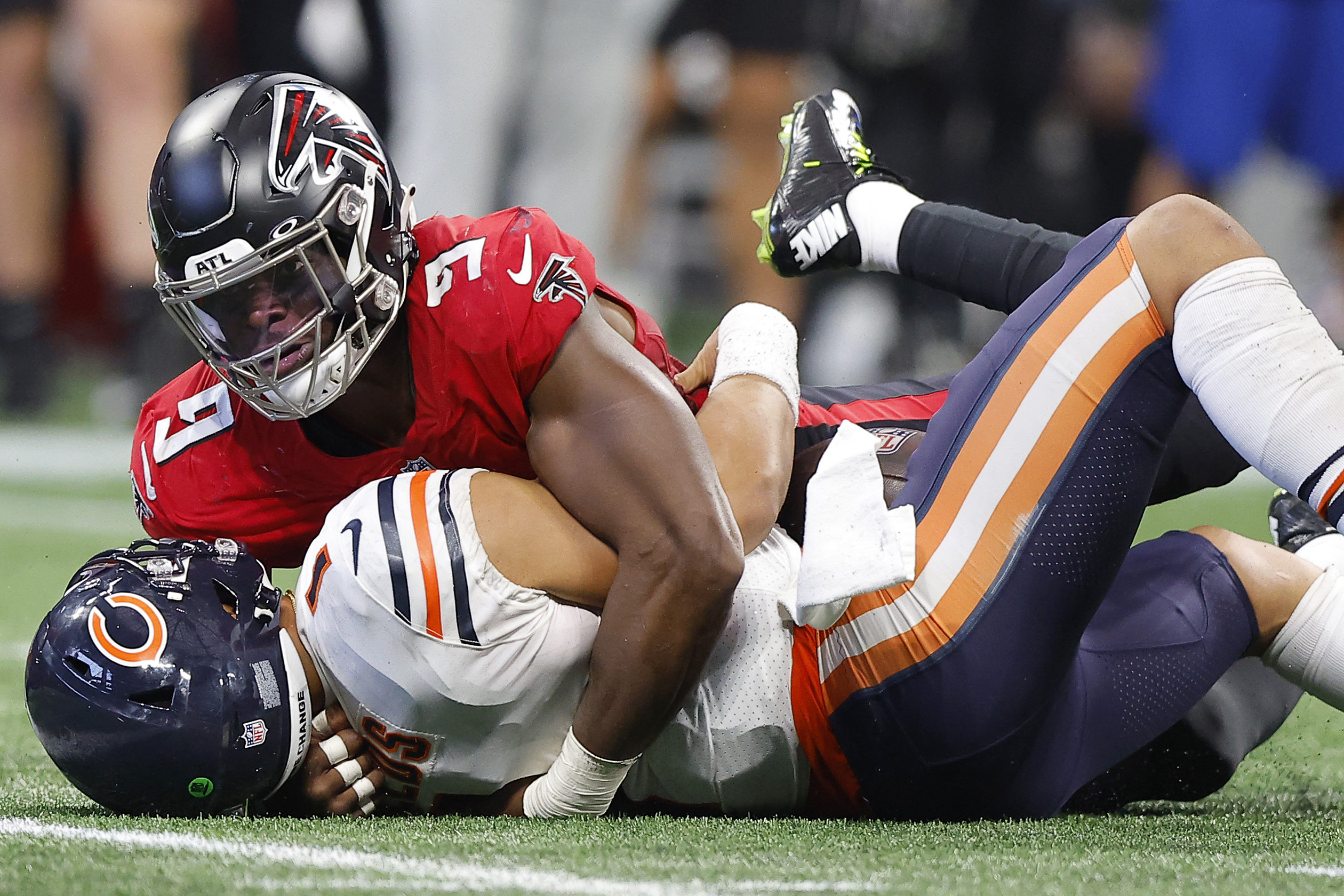 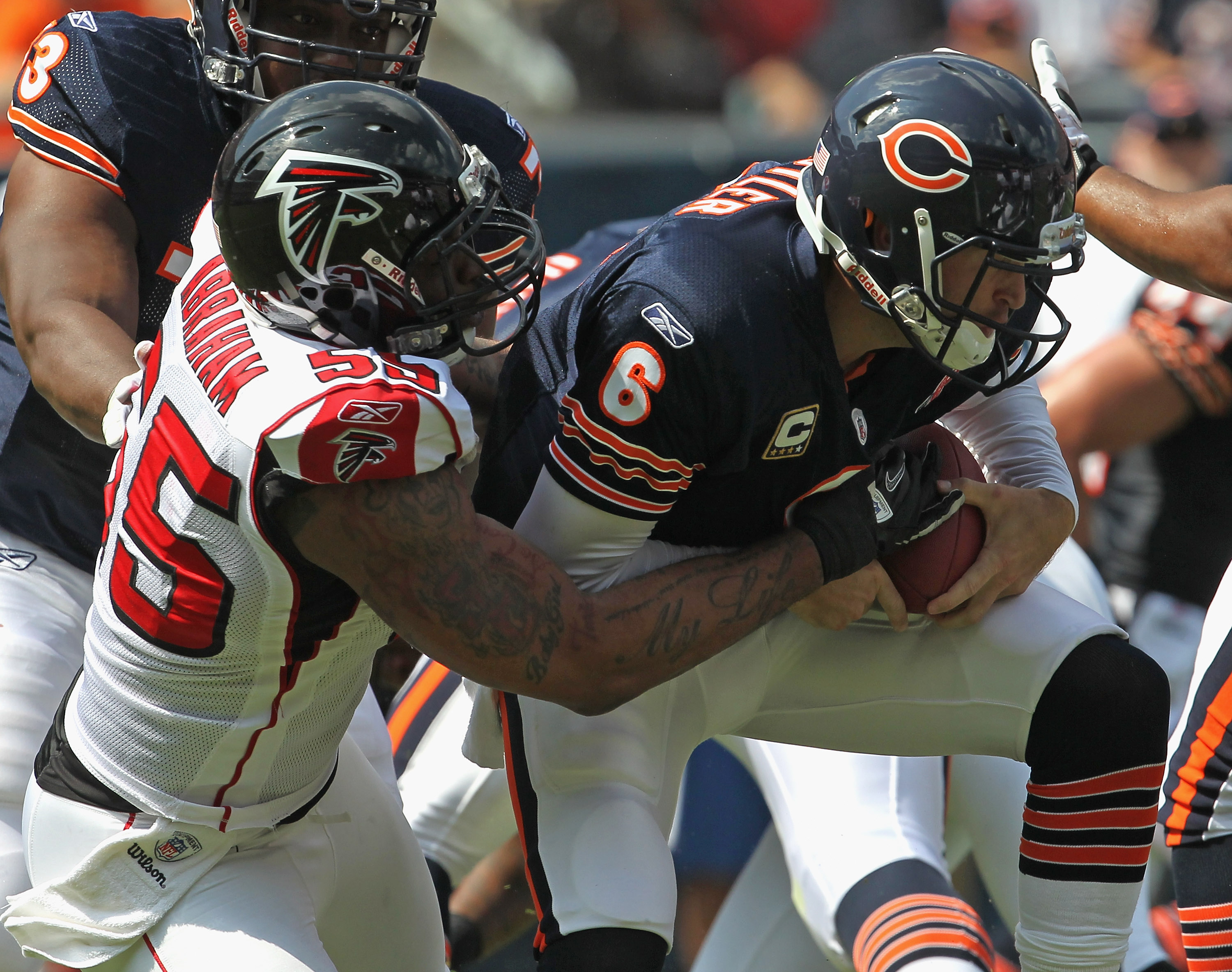 Jay Cutler holds the record for most times sacked in a Bears season at 52 in 2010, and with 6 games remaining in the 2021 season, Justin Fields has been sacked 40 times.
Photo by Todd Kirkland/Getty Images and Photo by Jonathan Daniel/Getty Images