The Chicago Bears gave up six sacks to the best pass rushing team in the NFL, the Philadelphia Eagles.

When we last visited the Sackwatch, the Chicago Bears had just held the Green Bay Packers without a single sack, but the Philadelphia Eagles made sure to get Chicago's pass protection back on a horrible track. With six sacks allowed, the Bears are ahead of last year's pace when they allowed 58, which is the second most allowed in team history. With three games remaining, Chicago quarterbacks have been dropped 48 times.

The all-time team record for sacks allowed is 66, which was set in 2004, so that record may still be safe with Buffalo, Detroit, and Minnesota left on the schedule.

Sack 43 - 1st Quarter 3:19 - Josh Sweat
This might have been the worst game of Cody Whitehair's career because a seven-year veteran should be able to pick up a stunt like this, and it’s probably upsetting those who picked up Justin Fields in their daily fantasy football draft. I initially wondered if Whitehair was completely healed from the knee injury that had him on injured reserve earlier this season, and then on Monday, it was revealed he injured his knee at some point during the game.

The Eagles don't do anything exotic on this tackle-end stunt; they just run it with perfect timing. Defensive end Josh Sweat (#94) presses upfield to get the attention of left tackle Braxton Jones before twisting around his defensive tackle, Javon Hargrave (#97). Whitehair engages with Hargrave and then passes him to Jones when he senses the stunt coming, but he's not quick enough for Sweat.

Whitehair came off Hargrave a bit late, then lunged at Sweat and wasn't athletic enough to stay with him. This is just the first sack allowed by Whitehair today.

Sack 44 - 1st Quarter :37 - Javon Hargrave
I didn't like the play call in this 3rd and 1 situation. The Bears have a really good running game and an electrifying playmaker at quarterback, so why is Luke Getsy dialing up a seven-step drop? Maybe he's trying to catch the Eagles off guard, but I'm not trusting the o-line — even with a back and tight end in to help — to protect for a deep drop.

This one is on Whitehair again, as he did too much reaching and not enough moving of the feet. Hargrave does a little hand fighting before working to Cody's outside.

Sack 45 - 2nd Quarter 8:29 - Haason Reddick
This was another where I wasn't happy with the call. I never like having a tight end matched-up one on one with an edge rusher, especially when that edge rusher has 35.5 sacks over the last three seasons. Asking Cole Kmet to help out with a chip or a double team is fine, but leaving him on an island is a bad idea.

Kmet motions back in from the right to pass block, as the o-line slides to the left. Even though I loathe the idea of letting Kmet block Reddick, this is what the Bears expected from him, so this is on Kmet.

Sack 46 - 2nd Quarter 3:49- Haason Reddick
Last week Alex Leatherwood performed so well that I threw together a quick video highlighting his handful of snaps, but this week was not one for the highlight reel. His first half was so rough the Bears didn't bother with him in the second half. Leatherwood struggled mightily on the right side a season ago in Las Vegas, and here he gets his head out too far in front of his feet and doesn't have the angle to cut Reddick off from the edge.

Sack 47 - 2nd Quarter :31 - Josh Sweat
Whitehair overcommits to the defensive tackle and is in no position to pick up the stunting Sweat. You can see in Cody's body language he realized it immediately.

Sack 48 - 3rd Quarter 11:02 - Javon Hargrave
This was another stunt the Bears handled poorly, but this one had the Eagles' defensive tackle (Hargrave) going behind the defensive end (Sweat), who went first. Left tackle Braxton Jones stayed on Sweat too long and wasn't ready for Hargrave, who came around for the sack. Whitehair was chasing, but ideally, you'd like him to accept the defensive end from Jones, while Jones takes the stunt coming back to him.

Pro Football Focus, who tracks sacks allowed each week, gave this one to Whitehair, but I don't see it that way. I'm giving this one to the rookie, Jones.

Justin Fields has three more games to play, and so far he's been sacked 46 times. The all-time single-season record for taking sacks in Chicago history is 52 by Jay Cutler in 2010, so Fields is inching closer to this record. 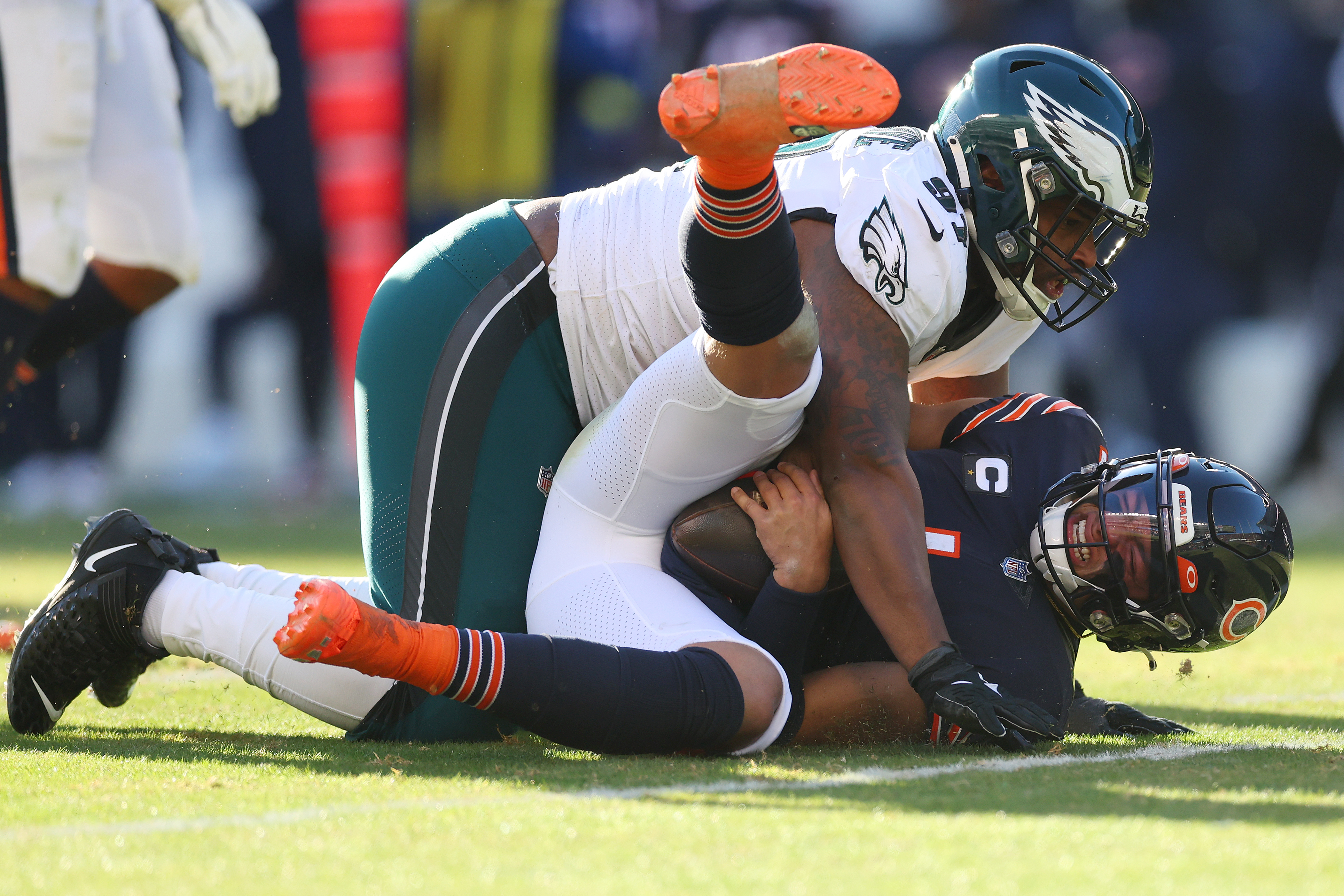 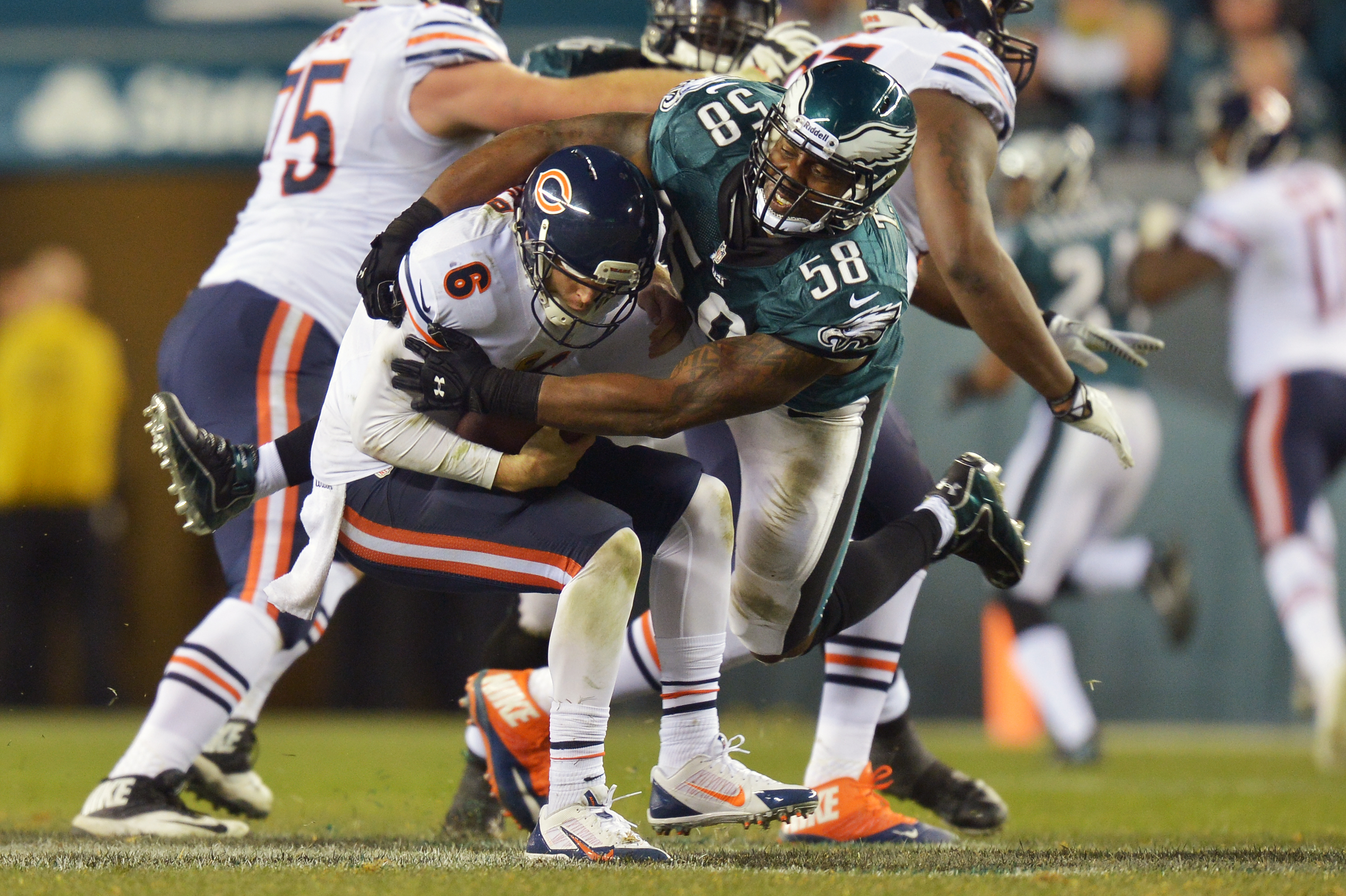 Jay Cutler holds the record for most times sacked in a Bears season at 52 in 2010, and with 3 games remaining in the 2022 season, Justin Fields has been sacked 46 times.
Photo by Michael Reaves/Getty Images and Photo by Drew Hallowell/Philadelphia Eagles/Getty Images

Here's the historical Sackwatch after 14 games: