The Chicago Bears gave up just two sacks this week!

Just two sacks allowed by the Chicago Bears this week, which brings their total up to 50 on the season. That's the fourth most in the league, but the Bears are number one in allowing a sack on 13.2% of their dropbacks.

The good news for Chicago's pass protection as they close out the 2022 season is that they have the Lions and Vikings, who are ranked 26th (5.5%) and 23rd (6.0%) in defensive sack percentage.

Here’s the historical Sackwatch after 15 games:

Sack 49 - 2nd Quarter :51 - Ed Oliver
The Bears were in an empty set on first down, and it looks like Fields was scanning the field from right to left, and the sack got home before he got back to the wide-open Velus Jones Jr. on the left side. Jones curled up between defenders, but defensive tackle Ed Oliver shucked Riley Reiff and sacked Fields.

Oliver (#91) runs a stunt by going out to right tackle Reiff, with defensive end Greg Rousseau (#50) looping back inside. Right guard Michael Schofield III passes Oliver off to his outside and accepts Rousseau coming to him. Schofield does a good job on this, but Reiff wasn't ready for the inside move by Oliver. This one is on the veteran right tackle.

Sack 50 - 4th Quarter 3:16 - A.J. Epenesa
Left tackle Braxton Jones was matched up with defensive end A.J. Epenesa (#57), and we've seen this story before. Epenesa extends his left arm into Jones' chest and drives him back while working around the edge. It's a long-arm move Chicago fans have seen ex-Bear Khalil Mack often do.

Jones played a good game against Buffalo, but this sack allowed is all most will think of. I graded his play and had him down as an 88.3% (+53/-7) against a talented Bills defense. He knows he needs to work on anchoring against the power rush, and he'll do so this offseason. He'll strengthen his core in the weight room, but he needs to also work on his hands. On this play, he lets Epenesa strike first, and that was enough for him to lose leverage. The long-arm move makes the defender skinnier and makes it harder for the tackle to have an area to strike. Ideally, Jones wouldn't have allowed the hand to get into his chest, so at this point, Jones needs to chop down at the elbow.

Justin Fields has just two more games to play, and he’s five sacks from the record. The all-time single-season record for taking sacks in Chicago history is 52 by Jay Cutler in 2010, so the pass protection needs to step it up to avoid surpassing that number. 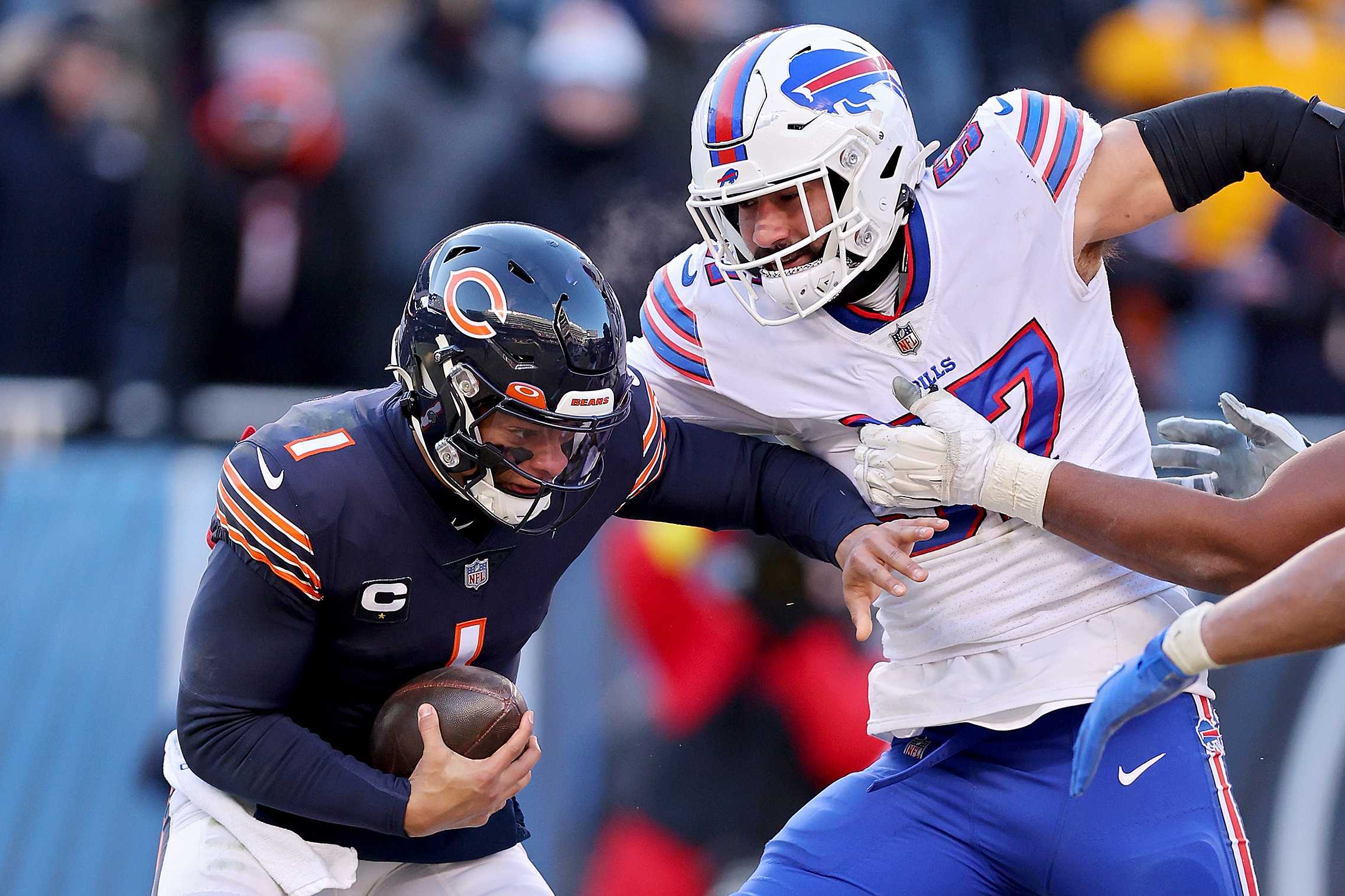 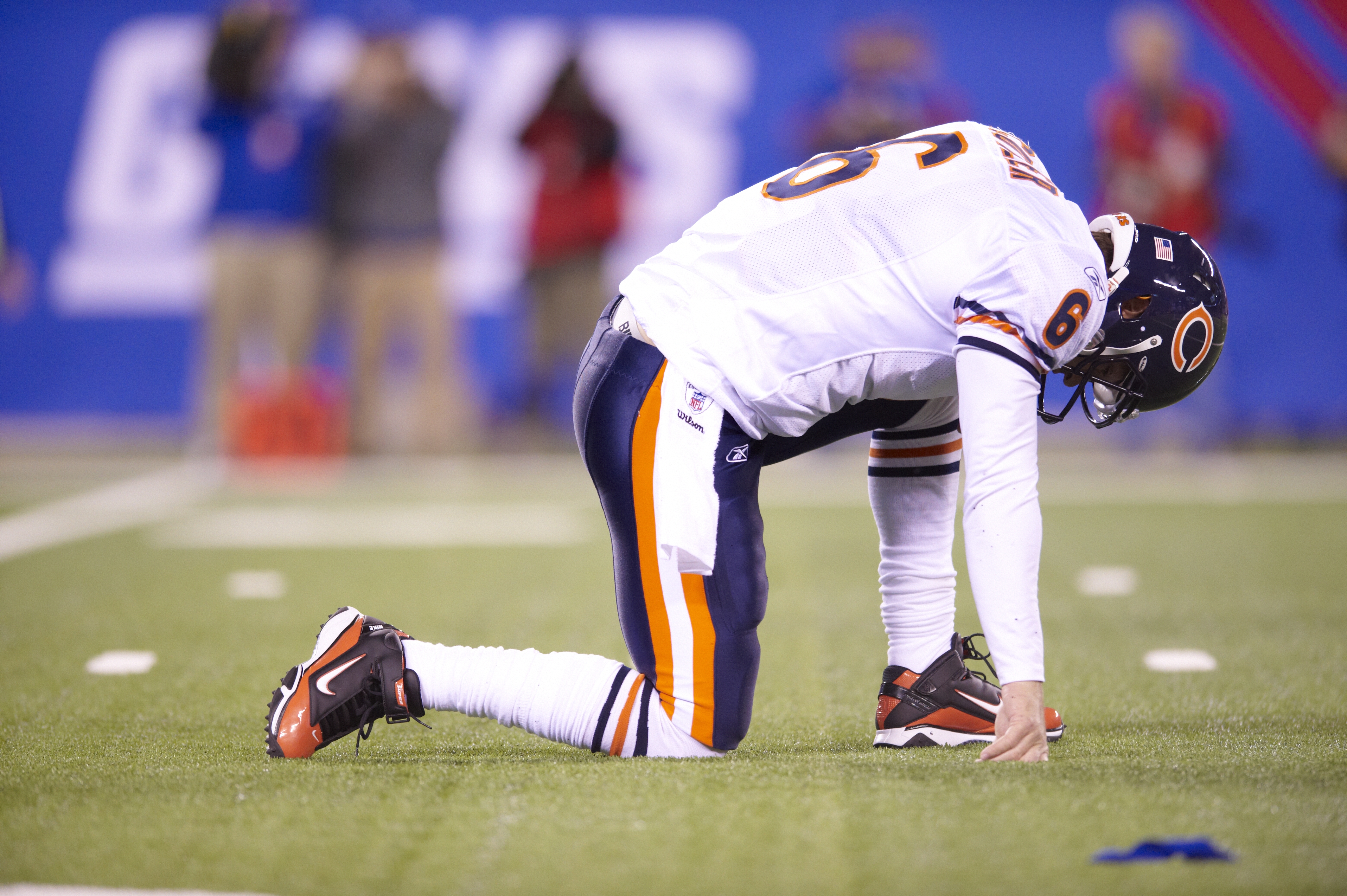 Jay Cutler holds the record for most times sacked in a Bears season at 52 in 2010, and with 2 games remaining in the 2022 season, Justin Fields has been sacked 48 times.
Photo by Michael Reaves/Getty Images