It's looking increasingly likely that the Bears may be relying on a rookie wide receiver to be a big part of the offense in 2022.

With the WR free agent market being underwhelming and some of the top targets (reportedly) already off the board, the Bears may find themselves bargain shopping for free agent receivers. That leaves the upcoming 2022 draft as the other option for getting Justin Fields weapons heading into his second season.

What can we expect from a rookie WR in his first season?

I took a look at the last five drafts (2017 - 2021) to see what kind of production teams were getting from their rookie WRs. I figure this can give us a framework for deciding what reasonable expectations might be for a newly drafted rookie WR.

For this analysis, I limited it to rookie WRs drafted in the 2nd and 3rd rounds. We don't have a first round pick, and I don't expect us to move up. So looking at what guys like Ja'Marr Chase or Justin Jefferson have done isn't really relevant. But adding 5th through 7th round picks is looking at players significantly less talented than the guys we're potentially drafting in the 2nd or 3rd rounds this year.

I do think it's possible that the Bears take a WR in the later rounds too. But I think we're probably going to be picking a WR in the 2nd or 3rd round, and that's the guy we'll be pinning most of our hopes on for the upcoming season.

To give a fairly objective benchmark for grouping performance, I took a look at the top half (#1-#16) offenses from the past 2 seasons. (I want to know what a WR1, WR2, WR3 are on good offenses. Not bad offenses). I pulled the yardage gained by the top receiver on the team, the second highest receiver, and the third highest receiver.

I then took the averages and medians, giving us these numbers: 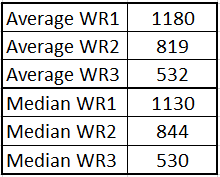 The averages and medians are pretty similar, so I went with median for my classifications. (sorry, the table says 'average', and I already created the image)

I created one more classification bucket, which was for a low end rather than median #3. This represents the cutoff between the upper 2/3s of #3s and the bottom 1/3rd of #3s. Basically, a player in that range is a little bit below average, but still better than about 1/3 of the other #3 WRs.

There were 49 WRs drafted in the 2nd and 3rd rounds in 2017-2021. Here's their yardage production in their rookie seasons:

When it comes to getting #3 WR production, the odds go up a decent amount, especially if we're dropping down into the range of the low end #3 option. There's about a 2 in 5 chance that a 2nd round pick will produce at an average #3 level, and close to a 50/50 shot he'll be at least a low end #3. With a 3rd round pick, it's more like a 3/10 shot we get low end #3 production.

Takeaway: If we draft a WR in the 2nd round, it's very reasonable to expect #3 WR production in his rookie season. If it's a WR drafted in the 3rd round, temper expectations a little bit, but it's absolutely a realistic outcome to get #3 production.

Finally, the ugly end of the possible outcomes: About 1 out of every 5 WRs drafted in the 2nd and 3rd rounds did nothing of any consequence in their rookie season (defined as fewer than 150 yards receiving). Note especially that with 3rd round receivers, 1 out of 3 didn't contribute much in year 1.

Takeaway: A 2nd round or 3rd round receiver is far from a sure thing. Getting nothing from them would be disappointing, but it happens with some frequency.

This analysis was only looking at rookie seasons. It has nothing to say about what % of these WRs go on to become #1s, #2s, #3s. You can find an eventual #1 WR in the 2nd or 3rd rounds. Chris Godwin, Cooper Kupp, DK Metcalf, Deebo Samuel. A few other guys, arguably. And based on his new contract, Christian Kirk, apparently!

For now, I was only focused on rookie production, because this is a big year for Justin Fields, our most important player. If we draft a rookie with one of our early picks, how much is he going to help right away? That's all I was trying to address with this.

Finally, the sample size isn't the biggest, so I'm not sure that any of this should be considered the final word. I could have added more years, but at some point I'm not sure it's adding relevant info. The game continues to evolve, and the NFL rookie WRs were coming into in 2008 isn't the same as the current one.

Another point - draft classes aren't uniform in terms of talent. The rookie WRs of 2021 kinda sucked in year 1 - only 1 WR3 season out of 10 players. The rookies of 2019 produced 3 WR2 seasons and 5 WR3 out of 11 players in year 1. If this is a strong, deep WR class, we might be looking at more of a 2019 situation in terms of expected outcome.

In any case, I do think this gives at least a rough idea of what a rookie WR drafted in rounds 2 or 3 might be expected to do. Let's hope if we draft someone this year, we're getting our hands on the next Chris Godwin or Terry McLaurin.