Back in 2018, our friend and colleague Jonathan Wood, came up with an interesting way to look at draft prospects at certain positions. This intrigued me and we put together some articles back at that time. For those of us who forget, 2018 is when Ryan Pace hired Matt Nagy to be the new Head Coach of the Chicago Bears.

There wasn't a whole lot to go off of, so we looked back at what the Chiefs and Eagles targeted in the draft under Andy Reid. From there, we took the NFL Combine measurements and developed a profile of sorts for each position. Ultimately, I took this a step further and looked at Vic Fangio and defensive players as well, which is something I ultimately am doing with Matt Eberflus as well.

Since the offensive roster is, well, offensive, this appears to be the biggest area of handwringing among fans. Most notably are the Offensive Line and Wide Receivers. I am a little behind at the moment but got the itch to take a look at this. So far, I have gotten the profile worked out for Interior Offensive Lineman (IOL) and will be expanding from there. Since this is probably the biggest need heading into the draft, its as good a place to start as any.

Lets start this exercise by looking back at the prior drafts of some of the new Bears Front Office and Coaching members. This chart is color-coded by team, so it should be pretty obvious which team drafted whom. Because there appears to be a Kyle Shanahan influence here as well, I added in the 49ers offensive draft picks since he has been there and added them to list. 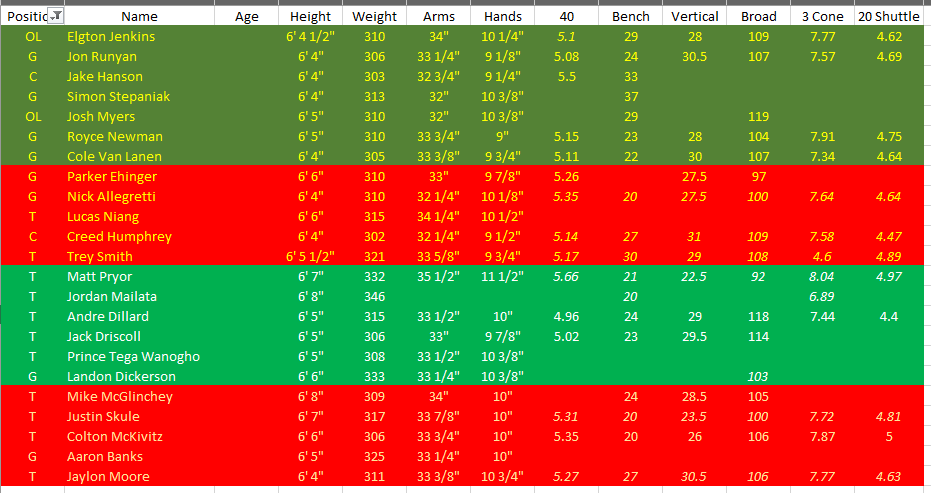 One thing really sticks out to me is the consistency of the size of the player. Another thing that sticks out to me is the athleticism. There is clearly an archetype of IOL that the Bears are most likely going to be targeting when the draft rolls around in a few weeks. It seems to me that we should be looking at a size range of between 6'3" to 6'5" and roughly 300 to 315 lbs. In other words, slightly undersized and highly athletic IOL, that are able to work in space and get to the second level.

After reviewing the prospects list and their combine results, I have come up with a list of targets. Some of them I have started watching film on, but time is short, so I feel it best to simply share the data and let others take a gander for themselves. In a past life, I would have given more notes and included videos, the whole nine. But life comes at you fast, so I am just going to point folks in the right direction here.

So here is the list that I have come up with based on the data collected from the prior drafts of the Packers (Getsy), Chiefs (Poles), Eagles* (Cunningham), and 49ers** (Shanahan).

*The Eagles ran an Inside Zone scheme and they tend to draft larger, more powerful OL, which would fit a more traditional Power/ISO running attack.

**The 49ers really focused on fixing their Tackle spots and since Shanahan doesn't really have anything to do with the Bears other than similar schemes, I didn't weigh those players as highly either. 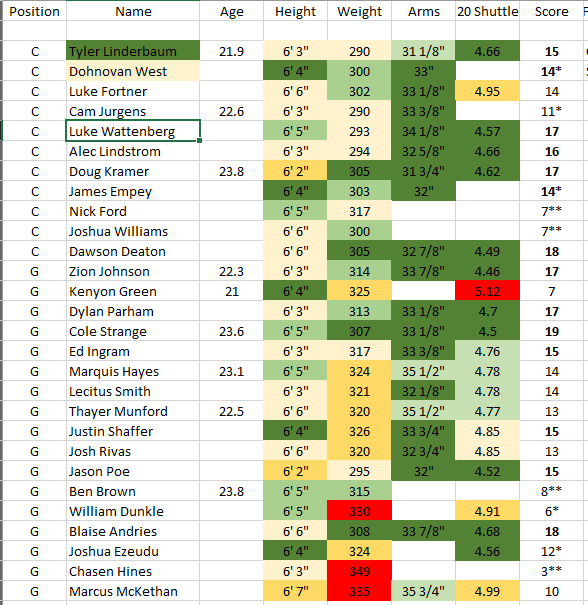 I awarded points based on how closely they hit the metrics that I identified by looking at previous drafts. Any player with 15--out of a possible 20 points--was included, and put in bold. Those are the players that I am currently watching on film. There are definitely a number of options for the Bears and I anticipate one (or more) of these players to be drafted by the Bears.

So there you have it Bears fans. This is the list of players that I will be looking into. It is much easier to watch a handful of players that have the physical traits that the team is most likely looking for than to watch everyone. What are your thoughts?