In many ways, David Montgomery is one of the most polarizing Bears, despite almost everyone agreeing he’s one of our better players.

As Montgomery heads into the last year of his rookie contract, there’s been a fair amount of discussion as to what the Bears should do with him after this season.

Most people fall into two general camps: either they want to keep Montgomery a Bear for at least a few more seasons, or they’re OK with the Bears letting him move on.


How do we decide whether Montgomery is worth extending?

In the past, much of the discussion about Montgomery has centered on how good he is. Is he an elite back? Just below elite? Slightly above average? Average?

Honestly, I think that discussion has been done to death, at least until we see what he does in 2022 in Getsy’s offense. If Montgomery has a monster season, that probably answers some questions about how good he is. So too would a season where he once again fails to exceed 4.0 yards per carry. We won’t know until the games are played.

But I’d like to approach the question of what to do with Montgomery a little differently. Let’s just agree for now that Montgomery is a top RB. Not necessarily the best back in the NFL, but in the group of running backs who should be in Pro Bowl contention in most years.

If we assume that Montgomery is a top 5 RB, should the Bears give him a contract extension? My answer is no. And that answer has very little to do with Montgomery himself.

Looking at past running back extensions

I wanted to look at RBs who have recently received substantial contract extensions to see how those extensions have worked out.

From 2015 onward, there have been 10 backs who received a contract fitting those criteria. 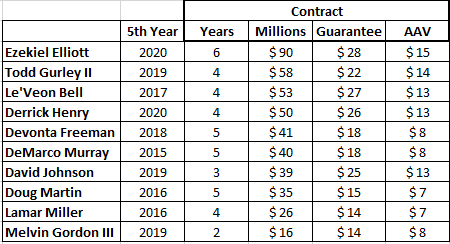 A quick summary: by and large, these extensions have worked out fairly badly.

One illustration – Take these 10 RBs and look at their years 2 through 4. I’m excluding rookie seasons because quite a few excellent backs have started a little slowly in year 1. Years 2-4 for those 10 RBs is 30 seasons combined. In those 30 seasons, we have 16 Pro Bowlers. In other words, more than half of these seasons were Pro Bowl performances.

The teams that extended these RBs were paying the most in the league at the RB position, but getting only a 15% chance of a top performance in the first two seasons of those extensions.

RB performance in years 2-4 versus years 5-6

The difference is pretty dramatic. The year 2-4 back is a top RB. That year 5-6 back is average at best by pretty much any measure you want to use.

You might think injuries would have a big effect on this. That certain backs get hurt and decline, but the ones that stay healthy continue to produce at their former level. But not really. You can see that carries and receptions are down, but not by a massive amount. Many of these RBs are staying relatively healthy, but just playing worse.

If you’d like to get away from using one average and look at each RB/deal individually, I’ve assigned a letter grade to each extension given to the 10 RBs based on how well they played in years 5 and 6.

(Obviously, these letter grades are subjective and you can feel free to quibble with any/all. But I don’t think the overall assessment is very far off.)

There’s one weird one here, which is Le’Veon Bell. Bell is the only of these 10 RBs who played his 5th season under the franchise tag. The Steelers then tagged Bell again, and he sat out the next season. He then signed a multi-year extension with the Jets.

So I have Bell down twice. The first is for the Steelers tagging him, which was an A move. He had an All Pro season. The second Bell entry is for the Jets, who gave him a big contract and got lousy production.

And you could even argue these grades are generous at times. Like for instance, I gave Ezekiel Elliot at least a C- for staying mostly healthy and being a volume back. But when you compare him even to RBs on his team in the last two seasons, he’s below average. He’s basically an average back at best during the past two seasons. And the Cowboys are paying more than nearly every other team for that kind of production. If the Cowboys could pay $12M+ or a rookie contract for league average production, which do you think they’d choose?

Getting C production for top 10 money invested in the position isn’t a very desirable outcome.

In the end, these 10 RBs produced 20 collective seasons in years 5 and 6 of their careers. Three were excellent, and the rest verged from average to awful. You can find ‘average to awful’ late in the draft, and you can find it from RBs floating around on 1- and 2-year deals for low money.

Only two RBs have come close to justifying their contract extensions out of 10 RBs. A 20% win rate is a sucker’s game.

Coming back to our Montgomery situation

So, let’s come back to Montgomery. Just looking at his production, he’s not on pace to match up with what guys like Todd Gurley, Ezekiel Elliot, and Devonta Freeman did in the first four years of their careers.

To which you can reply that Matt Nagy’s offense, mediocre offensive lines, and lackluster QB play have dragged Montgomery down. That if he played for the Cowboys or Rams or Falcons, he’d have the stats and accolades of Ezekiel Elliot or Todd Gurley or Devonta Freeman.

But even if this is true, I think the right move is to let David Montgomery explore free agency after 2022.

There just aren’t enough good outcomes when extending running backs in recent history to make it a smart move.