The offseason is long and boring. At a certain point, staring at the WR/OL depth charts for the 100th time begins to lose its appeal.

I created a database containing every player who has played in the NFL from 2007 to 2021. For each player, I've got an entry for every season from 2007-2021 containing:

I also created a database of every team's season played between 2007 and 2021, containing:
Now that I've built these databases, I've created some structure that allows me to easily run any number of queries on the databases.
Anything from something simple like 'What's the age range of starting WRs in the NFL?'

Or 'For all teams making it to at least the NFC or AFC Championship game, what's the breakdown of their starters by original draft position?' 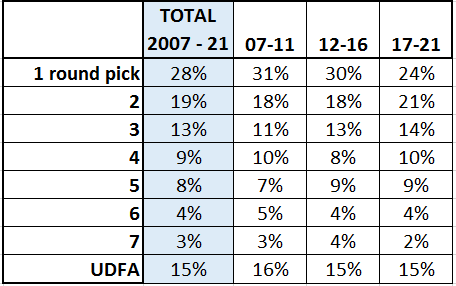 At this point, I've only built the capabilities for certain types of queries, but as long as the info exists in the databases, I could pretty easily pull any cross-section or cut of data.
I plan to play around with this, and I've already found some notable things. I may end up making a Fanpost or two highlighting some areas I think are particularly interesting or relevant to the Bears.
But I also wanted to throw it open for people who might be interested in stuff like this, or who've had pet theories or ideas about the NFL that they've never been able to confirm or deny.
If there's anything you're curious about in terms of NFL trends that these databases might be able to answer, post a comment asking about it and I'll try to get you an answer.
I have no idea whether there's any interest in this or not, but figured I'd at least make the offer.