Where a player was drafted matters. Not necessarily in a specific case - No one would take Sam Darnold (1st rounder) over Tom Brady (6th rounder). But in aggregate, players drafted higher in the draft perform better.

But looking at the NFL as a whole, who's actually starting the games at each position? How many 1st rounders, how many UDFAs, etc?

This article focuses on the offensive side of the ball.

I've pulled together data from all players who've played between 2007 and 2021, and will talk a little about how the offensive positions break down by where starting players were originally drafted.

An important caveat at the beginning:

In order to understand this data correctly, it's important to know what exactly it is. Specifically, what is a 'starter'? I classified a player's season as a 'starting season' if that player reached certain positional thresholds for snap count. In other words, I'm defining a starter by how much they played that year, not by a team's intentions going into the season.

What this means is that probably all my numbers are going to skew slightly more toward lower round guys and UDFAs. Because every season, plenty of starters get injured early in the year and replaced, and it's generally going to be higher round players being replaced by low round picks and UDFAs.

I don't think this is a fatal flaw in the data or anything - That's the way the NFL works, and I want to see what players are actually playing. But it's worth keeping in mind.

Anyway, on to the data. 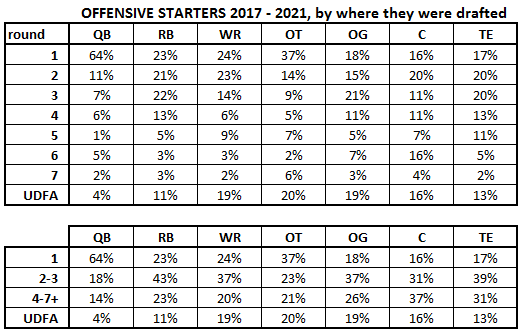 I'm starting out by showing only the 2017-2021 time frame data rather than 2007-2021. This is because these numbers are changing, sometimes significantly, as time goes on. I will get into those changes in individual position sections.

But for now, I feel like these tables give a good picture of how starters look at the offensive positions league-wide.

A couple of quick takeaways:

These numbers may confirm or refute certain ideas you've had about roster construction around the league. I think things get even more interesting when we start looking at trends over time, or at certain positions.

The Quarterback Position Over Time

Looking at the original table, QB jumps out as a position where a huge number of 1st rounders are starting relative to the other positions.

This is a trend that's escalating over the past 15 years.

What's the reason for this trend? As far as I can tell, it pretty much just boils down to QBs getting drafted earlier than ever before.

Which seems obvious, maybe, but I think there's a little bit of nuance, and I was a little surprised by this next fact:

The number of QBs being picked in the draft is remaining flat. In other words, it's the same size talent pool, just getting drafted earlier. 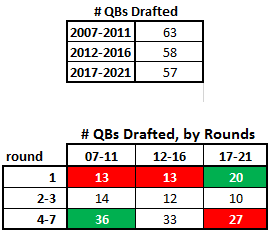 You hear a lot about how college programs are moving to more pro-style offenses featuring more passing. Which (I guess to me) made me believe that it would be possible that college was producing more pro prospect QBs. But that doesn't seem to be borne out in the draft numbers.

NFL franchises are picking around the same number of guys - around 12 QBs per year.

With the importance of the QB position and the best QB prospects going off the board quicker, you might think teams might start reaching for lower tier prospect QBs in the later rounds. But not really.

And the interesting thing is, it seems like teams are right not to do so. We aren't seeing any uptick in UDFA QBs being unearthed. It seems that there really are only about 10-14 pro prospect QBs each draft cycle.

The Running Back Position Over Time

In some ways, the RB position is kind of the opposite of the QB position. We've seen a collapse in the number of 1st rounder starting as time goes on.

The explanation seems pretty similar, too - The same caliber of RB prospect is largely just getting picked lower now than he was 10-15 years ago. 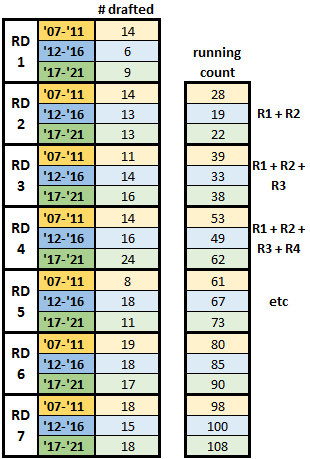 By round 3 to round 4, the number of RBs off the board are pretty similar. It's just that teams have stopped spending higher picks, especially 1s, on the RB position.

The WR Position Over Time

With QBs and RBs, we were mostly focused on 1st rounders. With the WR group, I'm more interested in the bottom of the table.

Here's my theory on why that is.

You're probably aware that teams are putting more WRs on the field. From 2007-09 to 2019-21, the average game has seen the total # of WR snaps increase by about 20. Given about 60 offensive plays per game, that means every 3 plays has an extra WR receiver on the field.

Which is kind of a big deal. 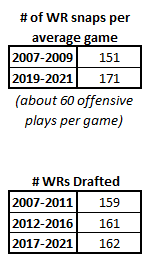 But at the same time, the number of WRs being drafted isn't changing.

So you've got a need for more WRs, but teams aren't drafting more WRs.

It's always a little bit dangerous to think 'here's an area where the entire NFL is making a mistake'. But it looks to me like the NFL is simply not drafting enough WRs. It doesn't matter how purely 'good' the UDFAs who don't get drafted are. The bottom line is that they're getting on the field in increasing numbers. Which means they are valuable assets.

I think teams should be picking more late round WRs than they are currently. I'd like to look into whether any specific teams are employing this strategy. But that's outside the scope of the article.

One further WR thing: With more than 2.5 WRs playing each play on average, looking at the total starter numbers doesn't tell you much about high end WRs.

I ran a further query to look at the top 32 WRs by yardage each season, as well as all 1000 yard WRs each season.

While plenty of UDFAs are seeing starter snaps, the top end of WRs are dominated by higher round picks, as one would expect. You can find contributors in the late rounds or UDFA, but most of your top WRs are coming from the top of the draft.

Breaking OT Down by Left and Right Tackle

To begin, it's worth noting that unlike QB, WR and RB, the round distributions of offensive linemen aren't really changing over the 15 year sample. Teams are still starting OLinemen at about the same distribution over time.

But there is one further area to break down that illuminates something worth knowing.

One of the big weaknesses of my database is that all OTs are simply labeled as OT, not left/right tackles. But the league treats these positions differently.

I went ahead and manually pulled LT/RT data from PFF/PFR for the 2019-2021 starters.

The results are dramatic. LT is a premium position, even approaching that of QB, with more than 51% of starters being 1st rounders. RT, on the other hand, is very much in line with center and guard. In fact, RT has the highest percentage of UDFAs starting.

From a roster construction standpoint, it looks to me like LT is the position you want to spend 1st round draft capital on, but that filling out the rest of your OLine can potentially be done in the later rounds and with UDFAs.

I'm certainly not saying it's never worth it to spend an early pick on stud RT, G, or C. But what league trends show is that plenty of teams are making do with lower picks and UDFAs just fine. The same is not necessarily true of LT.

Starters by Rounds Drafted on Winning Teams or Good Offenses

I was curious as to whether there'd be significant differences if I queried the percentages for only teams above a certain W/L threshold, or only teams that were top 10 in offense that season.

The short answer is that there's virtually no difference at all. The breakdowns were almost identical. It was a little weird.

I think I do know the reason, though. It comes down to the QB position. As an illustration, I pulled the 48 best offensive seasons (combination of points scored and yards gained) from 2007-2021.

Of those 48 seasons, 28 have QBs who are either in the HOF or are lock HOFers. 16 out of 48 are just Brady and Brees. That's not even counting another 10 by guys like Pat Mahomes, Josh Allen, Matt Stafford, and Andrew Luck who either might go to the HOF or were good enough to in their peaks.

Then you've got years like Lamar Jackson 2019 or Matt Ryan 2016. MVP caliber QB seasons. Only a few weird outliers like 2 Jared Goff Rams seasons and a random Matt Schaub Houston.

So in the end, I think the reason you can't find any difference in average starter draft status is because it kind of doesn't matter on offense. What's the best round for a starting guard? It's whatever round the guard was drafted who's blocking for Drew Brees or Tom Brady.

Those same queries for good defenses vs. bad defenses DO produce some different draft round distributions. So this effect is limited to the offensive side of the ball.

Another reminder that this is a quarterback driven league. Nothing is more important.

Of course, all those rules are dependent on the active state of your roster. And it's absolutely possible to find a stud WR in the 5th round or an UDFA LT. None of this is set in stone.
But I think that's a decent encapsulation of what these numbers are saying about talent distribution by draft status on the offensive side of the ball.