I've been looking at some NFL age/aging trends recently, and something jumped out at me: 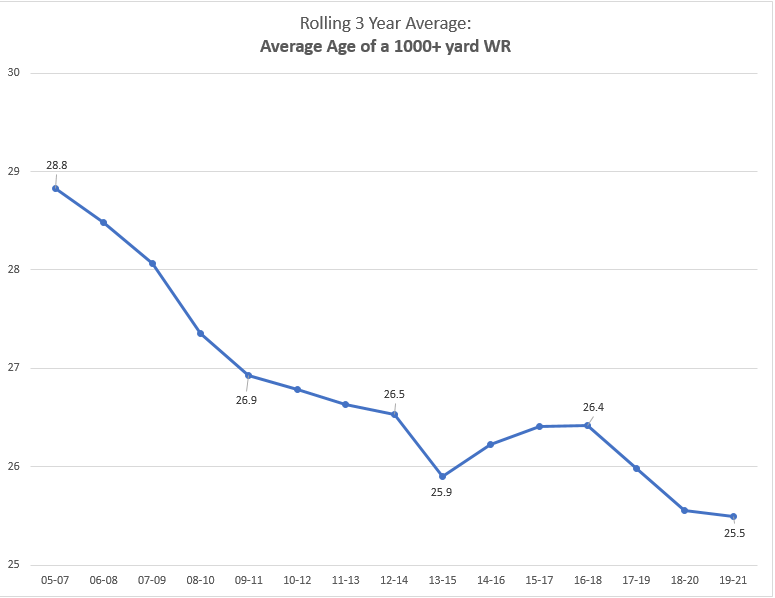 I'd been looking at the group of receivers who caught at least 1,000 yards in a season over the past 15 years or so, and noticed that the players seemed to be getting younger overall.

The above chart shows 3 year rolling averages over a 15 year set. And during that time, the average age of a 1000+ yards WR has gone down nearly 3.5 years. Which seemed like a lot to me.

Just intuitively, the simplest explanation for this is probably going to be one of two things - Either tons of younger and younger WRs are breaking 1,000 yards, or else far fewer older WRs are exceeding the 1,000 yard mark.

Turns out, it's much more the second explanation.

Elite Older WRs Seem to be Disappearing from the NFL

This next chart has the same basic concept as the first one, except this one is is tracking the % of 30+ year old WRs breaking 1,000 yards versus the overall total number of 1000+ yards WR each year. 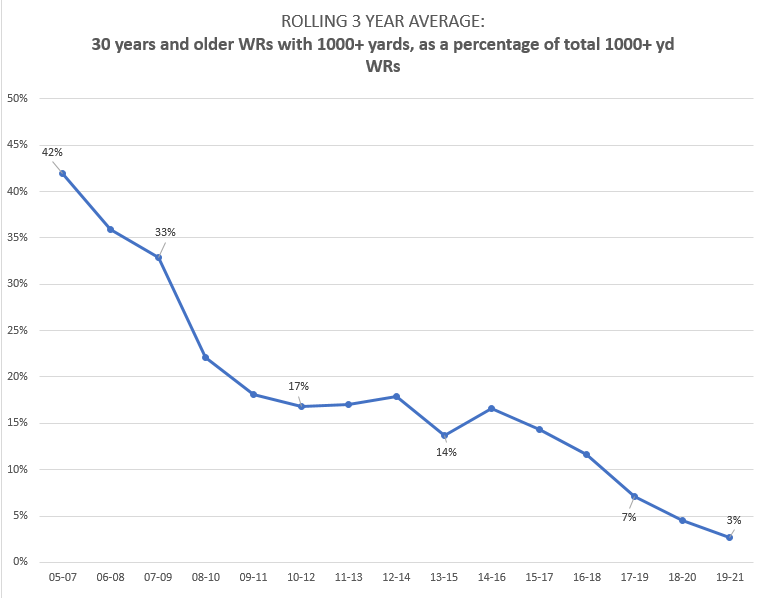 I can tell you that the number of 1,000+ yard WRs has remained very flat over the past 25 years. There's year to year fluctuation, but overall it's in the ballpark of around 20 WRs most years. So these percentages pretty equally translate to numbers over time.

We've gone from a league where 40% of the top receivers were at least 30 years old to a league where we're lucky if one guy over 29 breaks the 1000 yard mark.

(very briefly: Yes, the 1,000 yard threshold is somewhat arbitrary. But it's a round number that somewhat represents a high quality WR season. Don't worry, I'll have other metrics/stats later. But for now, sticking with the 1,000 yard thing)

Could This Be Due to Natural Variance in #s of Elite Players?

After looking at some of this data, I did wonder whether this could be somewhat due to just a great crop of elite WRs playing an unusually long time, starting 15 years ago. Maybe we were just blessed with a group of WRs whose bodies held up well from around 1995-2000. And that as the seasons went by and they finally started to retire, the number of elite old guy WR seasons gradually falls.

Maybe it's not common for older WRs to be top guys, and we just had a freaky group beat the aging curve together.

For two reasons, this is not the case. First, I went back another 10 years beyond my original data set. 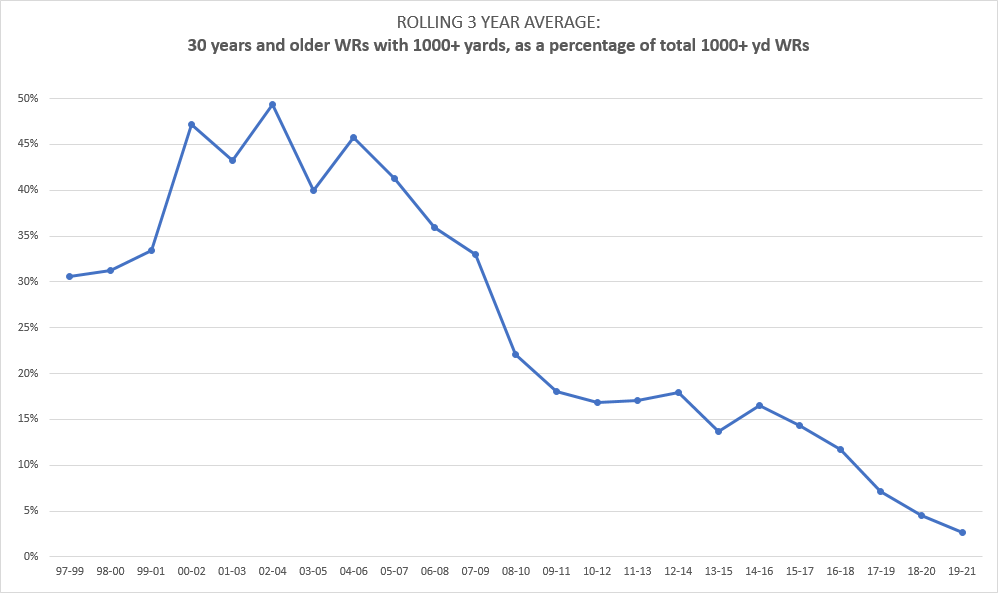 The data gets really spiky in the early 2000s for whatever reason, but it definitely doesn't look historically common for the % of 30+ year old WRs to drop below 30%, and it sat in the 40% range for at least half a decade.

Also, the trend of lesser contributions from older WRs isn't just at the top. 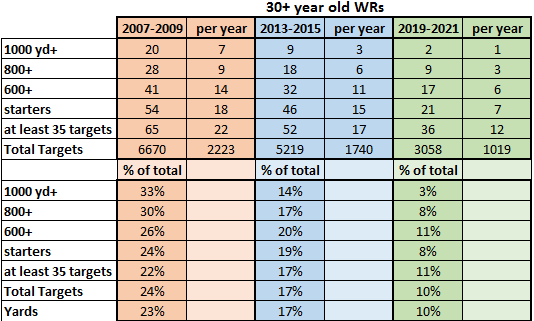 Here we can see the numbers over time by a few levels of production. From the top guys at over 1000 yards to looking at every WR with at least 35 targets in a season. There's also the statistic for total targets, which excludes no WRs at all.

At every level, you can see a marked decline in the share that older WRs are contribution.

The top half of the table also has breakdowns to # of WRs per season, which I think is helpful when it comes to getting your mind around exactly what the impact of this is.

But we're still talking a huge decline at the bottom. In the earliest years range, more than double the passes were thrown to older WRs league-wide.

So What's Going On?

Here's the part where I admit that this is a bad mystery story. In the sense that I can't solve the mystery at the end. I'm not really sure why older WRs are vanishing at the rate they are. I do have some theories, and I'm sure of a couple of things that partially explain it. But I don't feel like I can confidently explain exactly what the whole deal is.

I'm hoping maybe some of you might have some theories. But let me lay out a couple of things I either know or suspect.

The Whole League is Getting Younger

Just not to the same degree as the WR position. 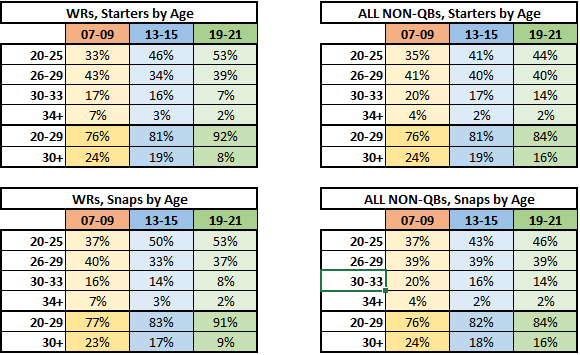 As you can see, the overall group of non-QBs is experiencing pretty significant tilt toward younger players, and seemingly in roughly the same timeline as the WR position. It's just that the numbers are far larger for WRs than the overall group.

I could break out every position group, but honestly this is already going to be super long as is. I can tell you that there's only one position that's experienced as dramatic a dropoff (although the nature is a little bit different), and that's the RB position. 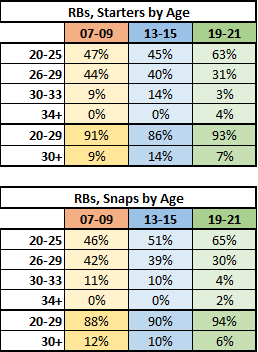 If you're just looking at the 20-29 vs 30+, it doesn't look like anything wild. The huge change over the past 5-7 years is the massive shift in starters (and to a lesser extent, snaps) toward RBs in the 21-25 year old range.

It's almost like a more extreme version of the WR timeline. With the WRs, the 21-29 age group has absorbed nearly all the 30+ WRs. With the RBs, it's the 21-25 group swallowing a huge portion of the 26+, but in an even shorter timeframe.

Anyway, getting back to the question of why WR ages are changing the way they are - I think the overall leaguewide aging trends may help with some guessing about what's going on at WR.

Here are some thoughts I have about why WR might be getting so much younger. In most cases, I either have no data or partial data to back any of this up, so take with a grain of salt. 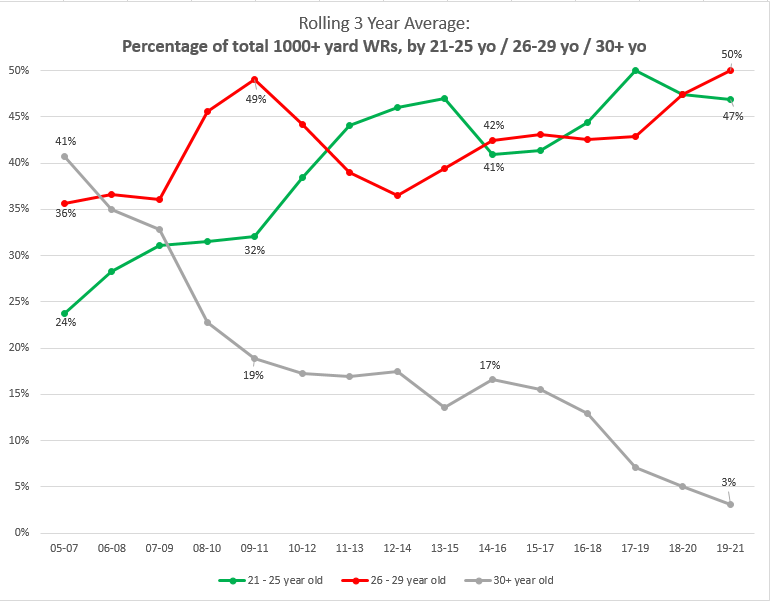 The number of young WRs hitting 1000 yards has doubled over the past 15 years.

Why Would Young WRs Be Better Now?

When it comes to Xs and Os, I know there are tons of people on WCG with more knowledge than me. So I'd especially love to hear anyone's thoughts on this theory from the offenses side.

To me, it seems possible that either of the following could be true:

The other side of the coin is that it's possible that WRs are entering the league better able to contribute earlier in their careers. As just mentioned, a young WR has certain physical advantages, but traditionally has been lacking in many skills that only come with NFL experience. To where I can remember a piece of common wisdom being that a drafted WR might not be expected to contribute much in the first year or two.
But if the 'old guy' skills are more developed from a younger age, the young WR can be integrated much more quickly. And if older WRs don't have as large an advantage in those areas, the young WR's physical attributes make him preferable. Plus, cheaper.

Why Does This Matter?

One reason this topic interests me is that I think it's a piece to the puzzle of the WR market we've seen recently.
There's been a lot of talk about this 2022 WR FA class being poor, and the 2023 FA class is already basically confirmed to be bad. WRs are demonstrably getting more money than ever before and are now one of the premium positions contract-wise in the NFL.
In explaining this trend, we've talked about things like the increasing prominence of the passing game (ftr, I'm not convinced this is valid if we're talking about just the last 15 years or so - I think the pass was already dominant). About how it seems like successful teams seem to have good WRs and the league taking notice and wanting to copycat. About how offenses are using more WRs per average play, making for increased demand.
But I've seen no one put out this theory -
Any market is fundamentally about supply and demand. From the top of the WR position, you can look at it like: What's the demand for elite WRs, and what's the supply of elite WRs?
The NFL is not drafting more WRs than it used to, and it's barely drafting more high round WRs than it used to. Which to me suggests that college is not producing a higher quantity of elite WR prospects.
What happens to the supply of elite WRs if suddenly the average elite WR is done as a difference-maker at the age of 28-29 instead of 31-32? It contracts the supply.
Now, you have teams that should be happy with their AJ Greens and Julio Joneses who now are in the market for a WR1. If the average 1000+ yard WR's age has gone down 3.5 years in the past 15 seasons, in a sense you've erased 3-4 elite WR seasons from a number of the best WRs.
I think it's possible that some of the WR crunch we're seeing is due to this age trend.

Evaluating Recent WR Moves Around the League, in Light of This

I even think it's possible (although I don't want to push this too strongly based on a limited amount of data and one offseason) that you can see some of this trend play out in the moves/contract extensions we've seen recently.
Deebo Samuel, DK Metcalf, Diontae Johnson, Terry McLaurin - All signed to big extensions by their original teams. Heading into their 25, 26, 26 and 27 year old seasons. Still have at least 3 pre-30 years.
AJ Brown and Marquise Brown - Both traded for a 1st rounder, despite it being arguable that neither are lock WR1s. But they've got youth on their side.
Meanwhile, SB contending teams trade Devante Adams and Tyreek Hill. Devante Adams will be 30 years old this season. I'm not saying I think he's going to bust - In fact, I think unless he gets hurt he's going to be the first 30+ year old WR since 2019 for sure. But re-evaluate the Adams move if you think maybe he's only got a year, maybe a couple of years left on top before he starts to fade. Rather than expecting him to be a great WR for another 4 years.
Hill is younger, heading into year 28. But he's also completely dependent on his otherworldly speed to be elite. If he slows down even a little, is he anything special?
I think the Adams and Hill trades potentially make a lot more sense if you consider the WR position to be a position with a brutal aging curve, increasingly dominated by younger WRs.
To end on Bears-centric and hopeful note - Let's hope that Darnell Mooney shows he's a true WR1 this season. Because if so, we'll have one of the most valuable assets in today's NFL - an elite WR heading into multiple seasons of his 20s.